Home » Trending News » Dancing With the Stars Season 28 Week 10: A Sad Goodbye To One Couple

Dancing With the Stars Season 28 Week 10: A Sad Goodbye To One Couple 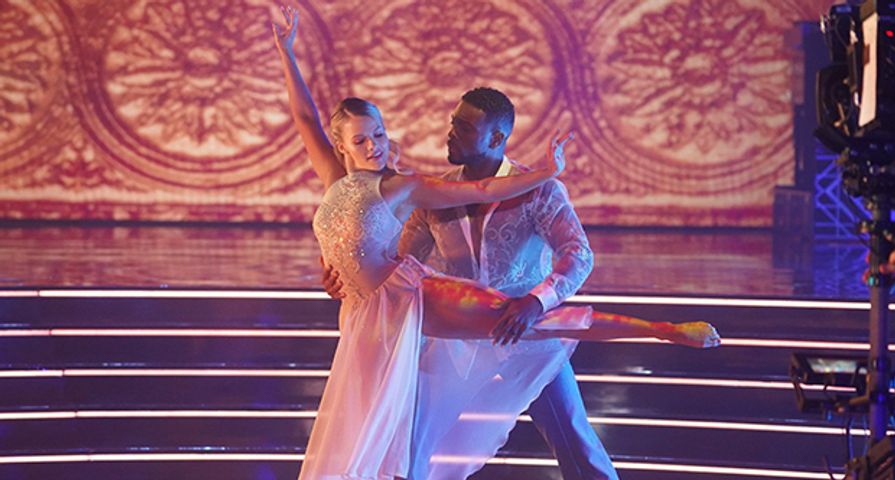 On Monday’s episode of Dancing With the Stars, which aired on November 18, fans got to see the pairs perform their redemption dances and an undeserving couple sent home!

The Dancing With the Stars couples had the opportunity to work with the judges and use the feedback they were given to improve on the dances they have previously performed on the season. The first round of the semi-finals focused on redemption dances and all the pairs really brought it!

James Van Der Beek and partner Emma Slater were paired up with Len Goodman, who coached the couple and helped Van Der Beek improve his cha-cha that he performed in week 2 of the competition. The actor needed to show Goodman some good hip action and crisp, precise movements. Instead, Van Der Beek channeled Travolta with his back walk-overs and exaggerated arm movements. “Because it’s disco music you want to get a slight disco vibe,” critiqued Goodman. “I would have liked to see some more cha-cha-cha. There was too much messing about going on.” The pair scored 24 out of 30 points.

Country star Lauren Alaina and her pro partner Gleb Savchenko were in the bottom last week. If they wanted to redeem themselves, Goodman told the pair that they needed to re-do their Paso doble from week 2 of the competition. On the advice of Goodman, the couple would need to add more traditional steps and shapes to their routine to really wow the judge – and they (mostly) did that in their redemption dance. “It was much improved,” Goodman said. “Well done.” “So much stronger, more centered,” judge Bruno Tonioli joined in. “I’m telling you, great job.” The duo scored 27 out of 30 points.

For Kel Mitchell and Witney Carson’s redemption dance, Tonioli told Mitchell that his tango from the first week of the dancing competition looked “skippy and jumpy” and that the tango should model a “panther, not a kangaroo.” The comedian was able to sync his movements to the beat of “Get Ready” by Motown and impressed the judges. “You delivered on everything I asked,” Tonioli declared. “You even managed to keep your own personality.” “You have become so refined,” added judge Carrie Ann Inaba. “You to me have come the furthest.” Mitchell and Carson received a score of 27 out of 30 points.

Bachelorette Hannah Brown and her partner Alan Bersten were told to revisit the rumba she performed in week 2. Brown seemed to be visibly upset about the ongoing stream of criticism from Inaba during their rumba rehearsal. The reality TV star admitted that “Carrie has always been a little harder on me” and “she has not been my source of confidence.” After the pair performed their redemption dance, Brown admitted that she wasn’t exactly upset with Inaba, it was more or so that she was having a really bad day. “I am so sorry if it seemed like I was dismissive of you trying to help me,” said Brown. Inaba replied sympathetically, and the pair hugged it out. The two scored 27 out of 30 points.

At the end of Ally Brooke and Sasha Farber’s Viennese waltz (a re-do from week 2), the pop star began to tear up after she realized that she nailed the improvements that Goodman told her during their rehearsal time. “Much more rotation than we saw the first time around,” remarked Goodman. “What a metamorphosis. You went from a caterpillar to a butterfly.” “You are such an emotional performer. That’s what gives you this magical factor when you dance,” added Inaba. “Thank you for pouring it on every time.” Brooke and Farber received 29 out of 30 points.

In the second round of semi-finals, the stars decided to dedicate their dances to loved ones or themselves.

Van Der Beek opened up earlier in the season about how he and his wife, Kimberly, were expecting their sixth child, but before his foxtrot performance, he shared on the show that the couple had just lost their child. The actor confessed that he didn’t expect to be performing on the show this week, but his wife told him that he should go on to perform anyway. “I don’t know how you got through that just now,” Inaba said. “I feel silly talking about your posture but what I really do appreciate is in the midst of all that, the human tragedy you went through, you gave great posture!” The duo scored 27 out of 30 points for their performance.

Brown decided to channel all of her disappointment with not finding love on The Bachelorette and her hope for finding love in the future in her contemporary dance routine. “Excuse me, madam, for the first time doing a contemporary dance, you did pretty well!” exclaimed Tonioli. “As I’ve said you move beautifully,” said Inaba. “Normally I’m not a big fan of contemporary. I’m a cup of tea in a world of lattes. But I must say the emotion came through.” Brown and Bersten received a score of 27 out of 30 points.

Alaina opened up about growing up in a working-class household and how making it to the finale of the show would be a “perfect way” to thank her parents for all the opportunities they have given her. The country star and her partner Savchenko performed a classy and graceful Viennese waltz that was well-received by the judges. “It was graceful. I like those elements of the slow waltz you put in,” commented Goodman. “So sophisticated, so classy, but what I like is the chemistry between you two,” added Tonioli. “It was like looking at a dream couple.” The duo scored 27 out of 30 points.

Mitchell dedicated his contemporary number to victims of gun violence after the comedian lost his teenage friend to gun violence in the past. He honored his friend and victims with his perfect performance. “What an achievement,” declared Tonioli. “It was pure art.” “The dance that speaks to me the most is a dance like that, where you tell a story and express your feeling,” added Inaba. “It was riveting. It was pure.” praised Goodman. Mitchell and Carson earned a perfect score for their performance.

Brooke and Farber performed the Charleston and gave it their all. The pop star believed that this week would be the last night she would be performing in the competition. “If your goal was to set out to show you deserve to be in the finals, done done done!” exclaimed Inaba. “It was fast, it was fun, it was fabulous,” said Goodman. “There was a lot of Charleston references going on.” The pair also received a perfect score.

This week Brooke and Farber and Van Der Beek and Slater landed in the bottom-two of the competition. Inaba and Tonioli decided to save Brooke so that James could be by his wife’s side and support her during such a tragic time. A devastated Brooke then asked the judges if she could take the actor’s place instead, in perhaps the show’s most emotional elimination ever.