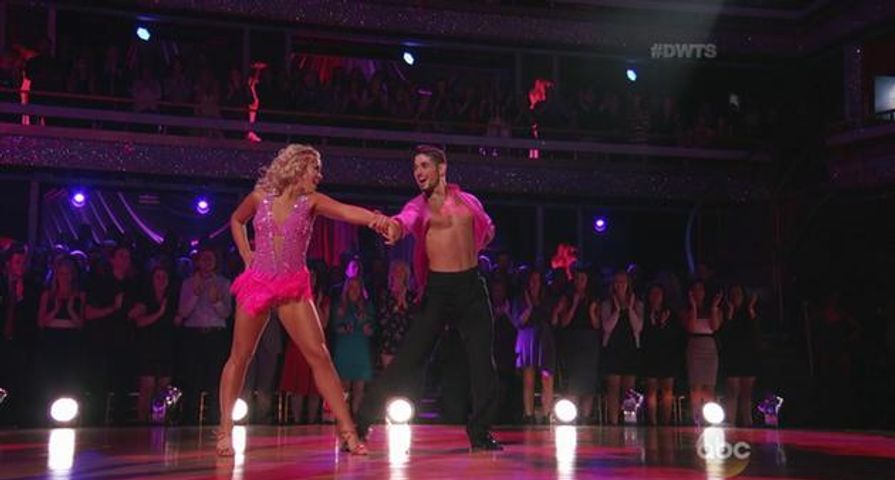 Dancing With the Stars heated things up on the dance floor last night with a Latin themed night. Some celebrities awed the judges and swept audiences away with their impressive dance skills, while others…not so much. After the first week of competing on DWTS the show saw it’s first elimination last night — find out which couple had to say farewell to the competition and their chance at winning the Mirrorball Trophy.

Jodie Sweetin seemed to crack under pressure as viewers saw her break down in rehearsal. Despite her emotions, the Fuller House star was able to pull through this week and received praise for her samba alongside partner Keo Motsepe. Although she did receive some advice from Bruno Tonioli and Carrie Ann Inaba to stop tensing up. Marla Maples performed a Argentine Tango with her partner Tony Dovolani that wasn’t too bad, but failed to wow the judges. Coming from high praise in last week’s competition Nyle DiMarco and Peta Murgatroyd failed to live up to their standards with comments from Len that their rumba was “too hectic.”

Paige VanZant lost her dance partner, Mark Ballas, temporarily due to a back injury, but the UFC fighter didn’t let that stand in her way of competing. She danced with stand-in Alan Bersten and delivered the “best dance of the season so far” according to Len Goodman. Wayna Morris and Lindsay Arnold remain effortlessly on top after succeeding with their salsa, while Ginger Zee, who is fresh off a pregnancy, struggled to find her groove, but managed to pull off a salsa after a slow start and a few road bumps with her partner Valentin Chmerkovskiy.

On the other hand, there are some stars who still seem lost on the dance floor, like Antonio Brown, Mischa Barton, and Kim Fields. Brown took a blow against his points when he performed an illegal lift with his pro-partner Sharna Burgess during their Rumba. Despite improving from the previous week, Fields and her partner Sasha Farber still couldn’t pull it together enough to impress the judges much. And Mischa Barton not only fell flat, but also came across a little bit rude during her rehearsals when she kept saying “whatever” to her dance partner Artem Chigvintsev and the production team. This transferred over to the dance floor with an off-beat performance that earned Barton even less points than last week which she blamed on not being able to hear the music.

Unfortunately, at the end of each show one team must be eliminated and last night, Geraldo Rivera and Edyta Sliwinska stood out like a sore thumb. Rivera has a noticeable lack of dance skills that couldn’t be saved despite his effort and Sliwinska’s skills. The couple received the lowest combination of scores from the judges and in audience votes last night, thus Rivera and Sliwinska became the first couple to be eliminated from DWTS.