Home » Trending News » Dancing With the Stars 28 Week 9: Who Will Be In The Semifinals?

Dancing With the Stars 28 Week 9: Who Will Be In The Semifinals? 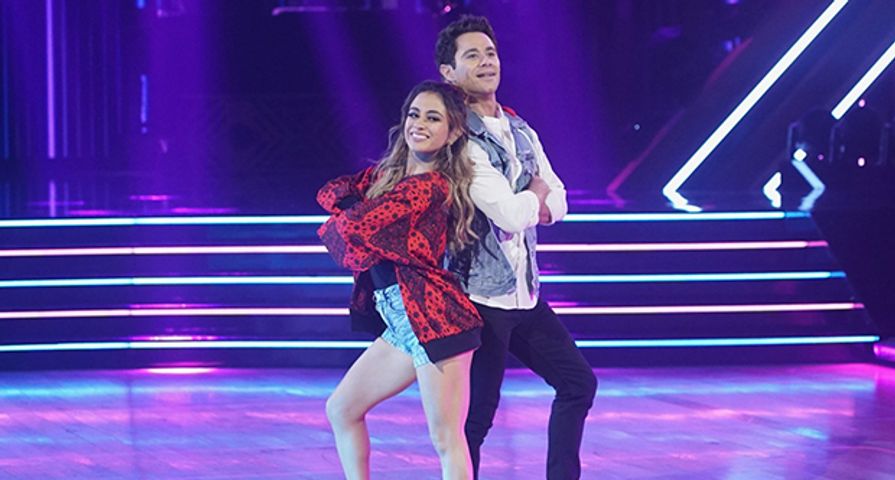 Week 9 of Dancing With the Stars focused on a Boy Band and Girl Group Night for the quarterfinal theme, and there was even a guest judge appearance  – from iconic boy band NSYNC – Joey Fatone, who couldn’t help but joke to the contestants “You guys were so in sync!”. We also found out who will be moving onto the semifinals.

Starting with James Van Der Beek and Emma Slater, the pair decided to perform the jive. The couple didn’t appear as synchronized as previous weeks, the arm-and-hand movements were off, and James seemed to remain a little ahead of the music. Thankfully, Van Der Beek got his timing back and was able to synchronize with Slater, and the rest of the performance was packed with energy and ended with a dance-split. The judges gave 36 out of 40 points for the first dance. As for the second dance from the pair, Van Der Beek and Slater performed a jazz routine to NSYNC’s “Bye Bye Bye,” and received a total of 36 out of 40 points as well.

This week, Sean Spicer danced with pro Jenna Johnson again due to his partner Lindsay Arnold mourning her mother-in-law’s recent passing. Spicer and Johnson performed an Argentian tango, this type of tango is known to have intricate and fast footwork, which had Spicer just standing around and Johnson taking the lead. At this point in the competition, the judges and most of the audience are aware that Spicer can’t dance, but he continues to stay safe. His first performance of the night received 26 out of 40 points. Next, Spicer and Johnson danced a foxtrot number that didn’t go as smoothly as the pair probably hoped. The second performance scored a whopping 24 out of 40 points.

Hannah Brown and Alan Bersten kicked this week off with an energetic salsa dance, but the judges weren’t entirely dazzled by the lifts in the choreography. This week, we could tell that Brown was attempting more intricate and challenging lifts than any of the other female contestants and that she is willing to try new things that push her limits. Brown and Bersten scored 32 out of 40 points for their first performance of the night. The pair’s second dance, a sultry tango routine, amazed the judges who gave the couple their highest score yet  – 39 out of 40 points!

Country star Lauren Alaina, who is still suffering from a fractured rib, and her partner Gleb Savchenko performed a quickstep, which was done well but was also forgettable as nothing from the routine stood out. The judges awarded the pair 34 out of 40 points for the first dance. Fortunately for the Alania and Savchenko, their second dance stood out. The duo performed a rumba that felt heartfelt and sensual – and the judges thought the same when they gave a score of 36 out of 40 points.

Kel Mitchell proved this week that he could take more of a lead role with his partner Whitney Carson. The pair’s first dance was a paso doble, and Mitchell really brought it on with his stepping section, knee slides, and we also saw Carson careen toward the stairs! While many people in the audience thought the pair’s paso doble was amazing, Len Goodman thought otherwise and was displeased by the lack of paso doble was present in the dance. The couple received 34 out of 40 points from the judges. Mitchell and Carson’s second dance, a Viennese Waltz, was so smooth (almost like an ice-skating routine) that it impressed the judges enough to give the couple a perfect score!

Lastly, Ally Brooke and Sasha Farber’s routines (a salsa and a jazz) both earned perfect scores from the judges! This season, the couple has performed very well so far in the contest and continue to dazzle the judges. Some viewers of the show have noticed that the pair hasn’t received any harsh criticism (like Brown and Alania) and that some of Brooke’s moves this week were a little on the sloppy side.

This week, many were glad (most likely the judges) that Sean Spicer was – finally – eliminated from the show and would not be advancing to the next round.

As for which couples will be moving on, we have Ally Brooke and Sasha Farber, Kel Mitchell and Whitney Carson, James Van Der Beek and Emma Slater, Hannah Brown and Alan Bersten, as well as Lauren Alaina and Gleb Savchenko.