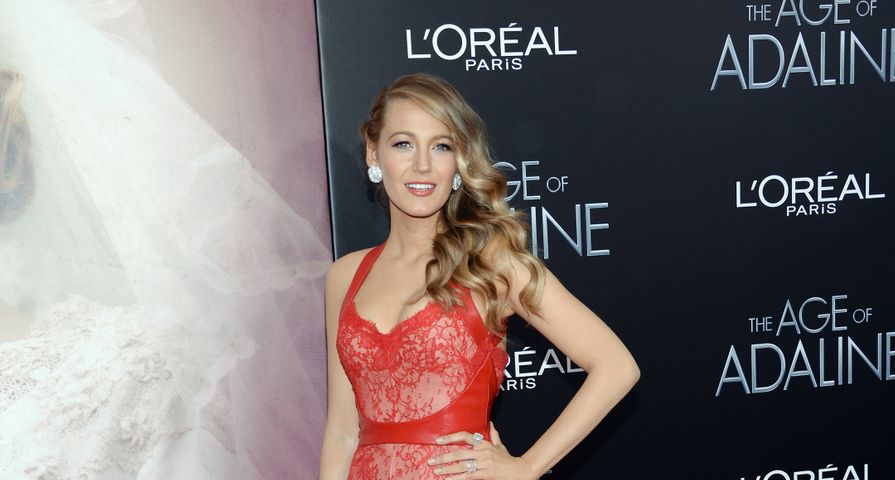 New mom Blake Lively has been mostly out of the spotlight in the 4 months since giving birth to her first child with husband Ryan Reynolds, daughter James Reynolds.

With a new movie out however the gorgeous actress has had to get back to work with press tours and once again showing off her excellent fashion choices and absolutely wowed at The Age of Adaline premiere on Sunday April 19 in NYC.

Lively walked the red carpet at the AMC Loews Lincoln Square showing off her incredible post-baby body in a red Monique Lhuillier gown. The lace bodice and waist accent showed off her amazing figure and the dramatic feathery skirt was as head-turning as a gown could get.

The 27-year old was joined on the red carpet by her co-star Michiel Huisman, best known for his role as Daario on Game of Thrones, and Lionsgate took the opportunity to promote the movie with the stunning duo on their Twitter page writing, “@BlakeLively and @Michiel_Huisman are the perfect pair! True love never looked so good. #AdalinePremiere.”

While Reynolds could not be at the premiere as he is busy filming Deadpool, he did have a response for the “True love” pair writing back jokingly on Twitter, “Uh…I can HEAR you. @AgeofAdaline #AgeofAdaline #ladyinred.”

During her press tour for the film, Lively explained why she chose this one as her first major role since Gossip Girl, “I feel like magic doesn’t exist much in films these days, unless it’s a superhero movie or has a wand. But that magic in humanity, magic in a quiet film, is rare. When [movies] like this come along, they’re called ‘little movies that could.’ Adaline is sort of between that, because it’s a movie that can reach a broader audience, but it still has that magic and humanity.”

Also Check Out: 7 Celebrities Who Are Brutally Honest About Losing The Baby Weight