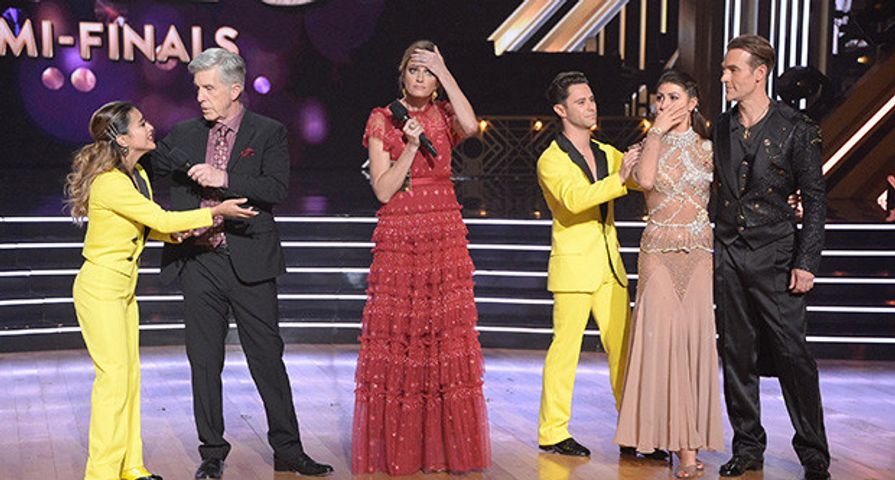 Although James Van Der Beek’s Dancing With the Stars journey is officially over, finalist Ally Brooke tried to give up her spot on the finale to him.

Brooke and the former Dawson’s Creek actor placed in the bottom two of the competition right before the finals. The judges chose to save Brooke, as Van Der Beek opened up earlier in the episode about how he and his wife lost their baby over the weekend.

The former Fifth Harmony singer immediately offered her spot in the finale to him, but the actor refused.

Brooke spoke to reporters and revealed what the actor told her after she tried to give up her spot for him.

“He was just like, ‘I can’t accept that,’ and ‘It’s very, very kind,’ and he said, ‘Just enjoy it,'” she recollected from their conversation. “I talked to him afterward as well and I tried to offer again … and he was just like, ‘No, please, you just enjoy it and you shine and don’t be afraid to shine,’ are the exact words he told me.”

“I’m taking that in,” Brooke added. “Even though I’m very sad and in a way feel like I shouldn’t be here, I’m trying to celebrate my personal journey, too.”

An emotional Van Der Beek opened up in a video package about the devastating news about their sixth baby that was on the way.

“My wife Kimberly and I went through every expecting parent’s worst nightmare. We lost the baby,” the actor said. “The little soul that we had expected to welcome into our family took a shortcut to whatever lies beyond.”

“You never know why these things happen, that’s what I’ve been telling my kids,” Van Der Beek continued. “All you know is that it brings you closer together, it breaks you open, it opens your heart, it deepens your appreciation. It makes you more human.”

He also admitted that he didn’t think he would dance on Monday’s episode of the show, but his wife pushed him to and said: “the show must go on.”

Brooke talked to reporters about the elimination.

“You just don’t know what’s going to happen on this show. I danced my heart out and one by one they called different names and then it dwindled down to the bottom two, and unfortunately, I was in the bottom two and unfortunately James was as well,” Brooke said. “In that moment I just felt so wrong to just stand there. I felt like I really needed to just stand up and give it to James.”

“I didn’t even want them to vote,” she continued. “I just wanted to give it to him. That’s what I was feeling in that moment ’cause I felt like it wasn’t right to move on and be here. … I just felt it wasn’t right after everything that James has gone through. Being human and seeing that he’s been through one of the worst things in life and … he had the strength to be here today and that in itself is unbelievable.”

“That took immense strength from him and I felt like in that moment it just wasn’t right,” Brooke added. “He was there and I was there and I just felt like he deserved to be there after everything he went through.”

Brooke mentioned that Van Der Beek also encouraged her off stage too.

“He’s just one of the most magnificent, unbelievable people I’ve ever met in my life,” she remarked about Van Der Beek.

In next week’s episode of Dancing With the Stars, fans will see Brooke, Lauren Alaina, Kel Mitchell and Hannah Brown compete with their pro partners for first place on the finale.

The finale of Dancing With the Stars airs on Monday, November 25, at 8 p.m. ET.