Actor Simon Rex shared that the British tabloids offered him money to lie about Meghan Markle!

Rex opened up in a recent episode of the podcast “Hollywood Raw” that U.K. press outlets offered him up to $70,000 to exaggerate the details of his friendship with the Duchess. He had been rumored as an ex-boyfriend, but Rex set the record straight that the duo were only friends.

“Nothing happened. We never even kissed,” Rex said on the podcast. “It was just, like, we hung out once in a very non-datey way. She was just someone I had met on a TV show and we got lunch. That was the extent of it.”

Meghan and Simon met while working on a series called Cuts in 2005, which depicted the obstacles faced by the employees of a family-run barbershop in Baltimore.

While Meghan was dating Harry back in 2016, a number of British tabloids dug into her past and her dating history, including her relationship with Rex.

“When that story broke, a couple British tabloids offered to pay me a lot of money to say a lie that we actually hooked up,” Rex continued. “I said no to a lot of money because I didn’t feel right lying and f–king up the royal f–king family.”

Before Meghan and Harry announced their decision to step down, the duo took legal action against a number of British press outlets.

“I have been a silent witness to her private suffering for too long. To stand back and do nothing would be contrary to everything we believe in,” he said at the time. “There comes a point when the only thing to do is to stand up to this behavior, because it destroys people and destroys lives.” 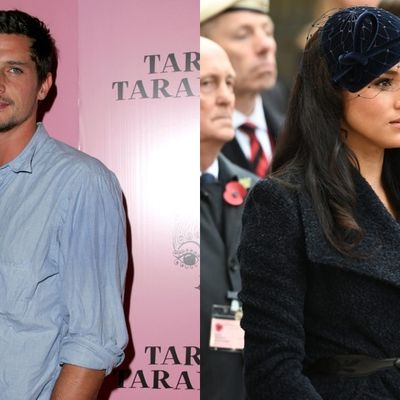