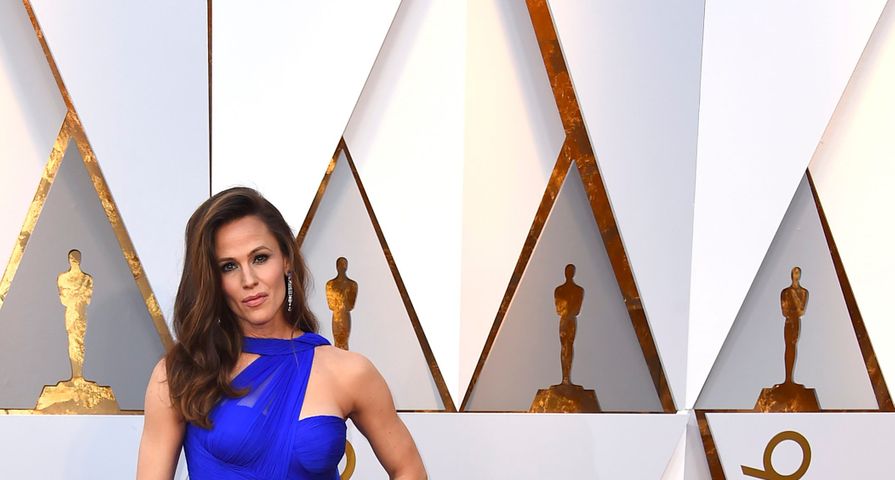 The highly anticipated annual Academy Awards took place last night and the red carpet was a sea of sparkles, taffeta and chiffon! As always, the awards show red carpet is seemingly just as exciting as the event itself and this year the stars of Hollywood definitely did not disappoint. From Jennifer Garner’s cobalt blue number to Sandra Bullock’s sparkling halter garment, follow along for 15 of the best dressed star’s from the 2018 Oscars red carpet:

Allison Janney looked absolutely radiant in this cherry red Reem Acra gown. The look featured a flattering sweetheart neckline which balanced well with the dramatic cape-detailing that cascaded from the sleeves. We love how glamorous and dramatic this look is, especially when paired with the chunky diamond necklace. 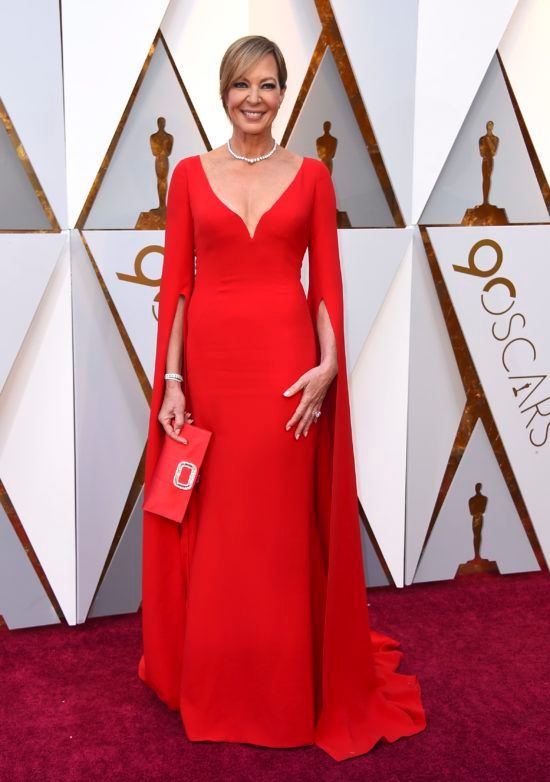 Gina Rodriguez dazzled on the red carpet last night in this sheer, sparkling number! The champagne Zuhair Murad number featured a dramatic plunging neckline, metallic belt and a full, voluminous skirt. Rodriguez topped the look by pulling her hair back into a chic, slicked ponytail to truly allow the details of the intricate garment to shine. 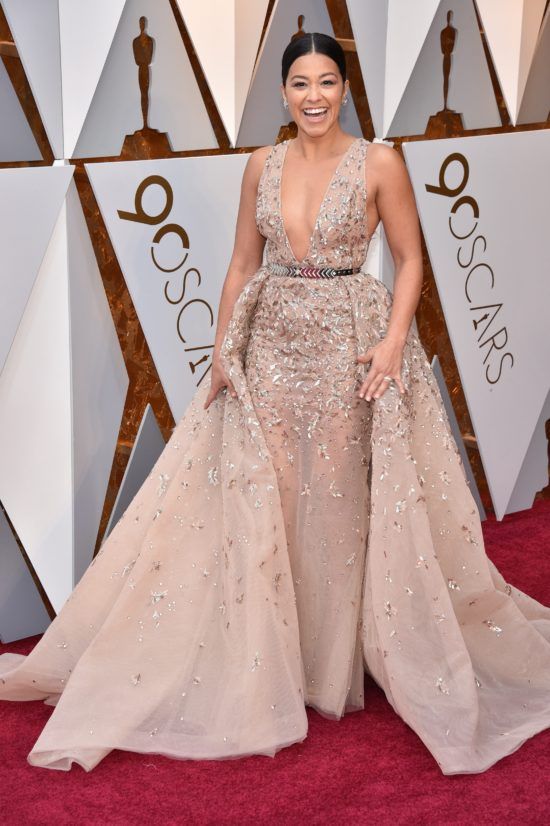 Helen Mirren looked super sophisticated and polished last night in this cornflower blue number. We love the simplicity and elegance of this look. The lines are clean and sharp, yet Mirren brought the glamour by accessorizing with a dramatic sapphire necklace and matching earrings. 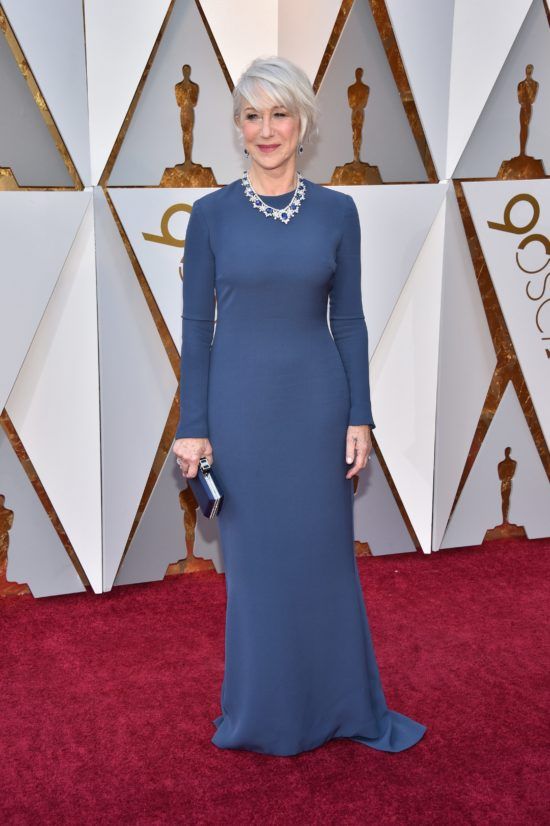 Elisabeth Moss has landed on quite a few worst-dressed lists during the awards show season this year, so we were thrilled to see her step out in this lovely powder pink number last night! The Dior Haute Couture gown featured sheer, sparkling layering and an ultra flattering off-the-shoulder neckline that crossed along the bust. This look was delicate and feminine yet still glitzy and a total show stopper. 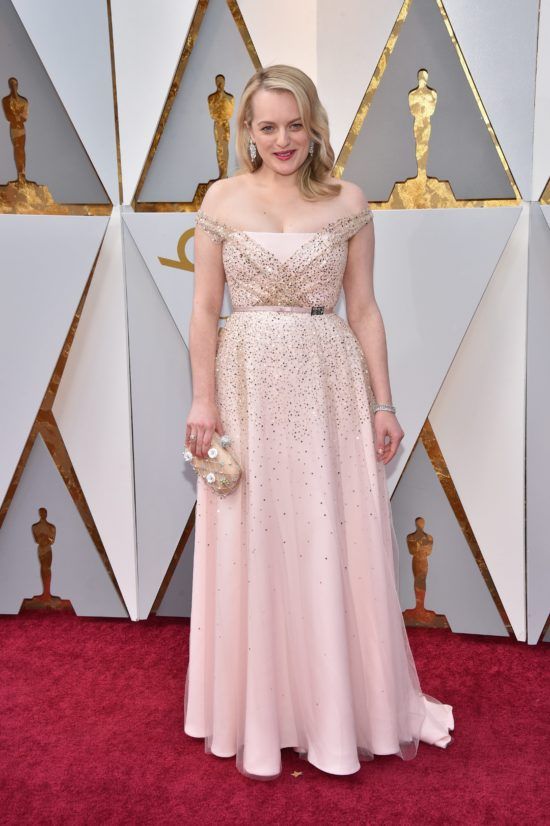 Nicole Kidman has had a rocky year when it comes to red carpet fashion, but she definitely killed it with her 2018 Oscar’s look! The royal blue number was designed by Armani Prive and featured a plunging sweetheart neckline and an exaggerated bow detailing along the hip. Kidman is definitely not shy to take a fashion risk or two, which we love about her, and this particular sophisticated look was undeniably a risk that was well rewarded! 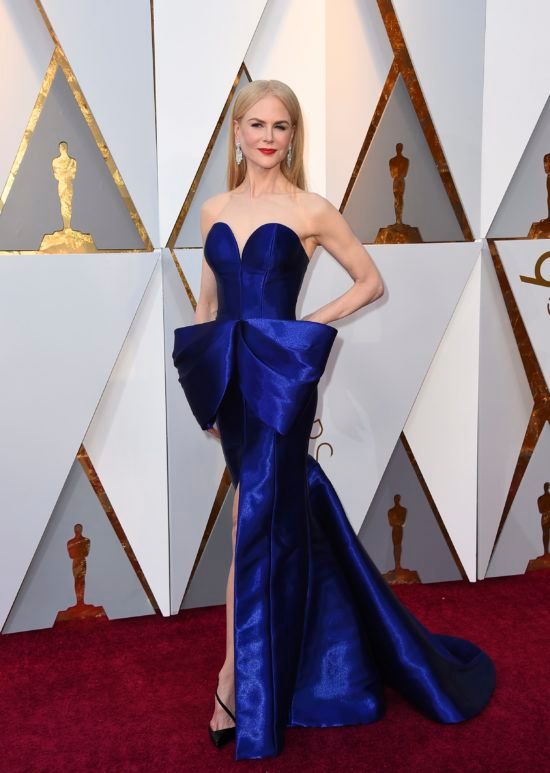 Meryl Streep was the epitome of elegance on last night’s Oscar’s red carpet in this striking red number! The Christian Dior Haute Couture number featured minimal embellishment which allowed the color and sharp lines to do all the talking. The cut flattered Streep’s figure flawlessly and we love the simplistic and clean feel of this look. 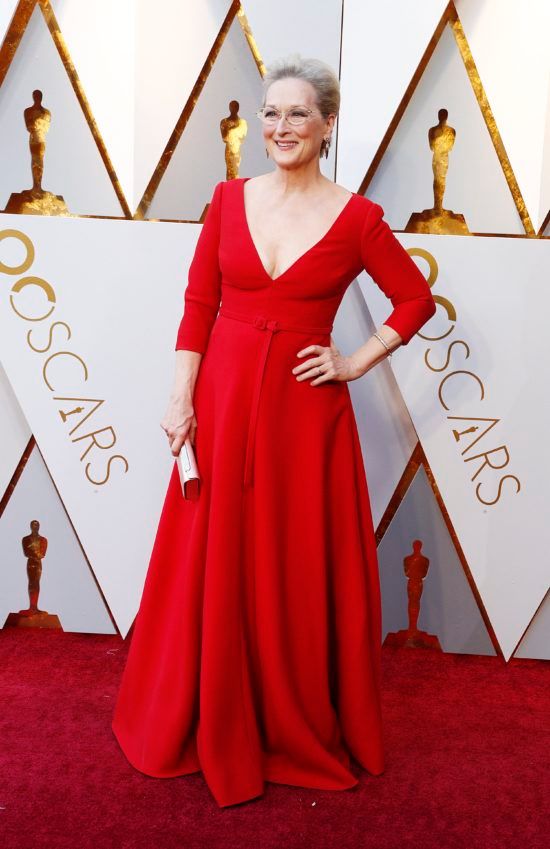 Laura Dern was a vision in white on last night’s Oscar’s red carpet in this Calvin Klein by Appointment garment! The look featured sharp tailoring and a sleek body-hugging shape that was the epitome of elegance. We love the drama of the asymmetrical sleeve detailing and the alluring yet still modest plunging neckline. She accessorized flawlessly with drop-style diamond earrings which were put on display by her polished, side-swept locks. 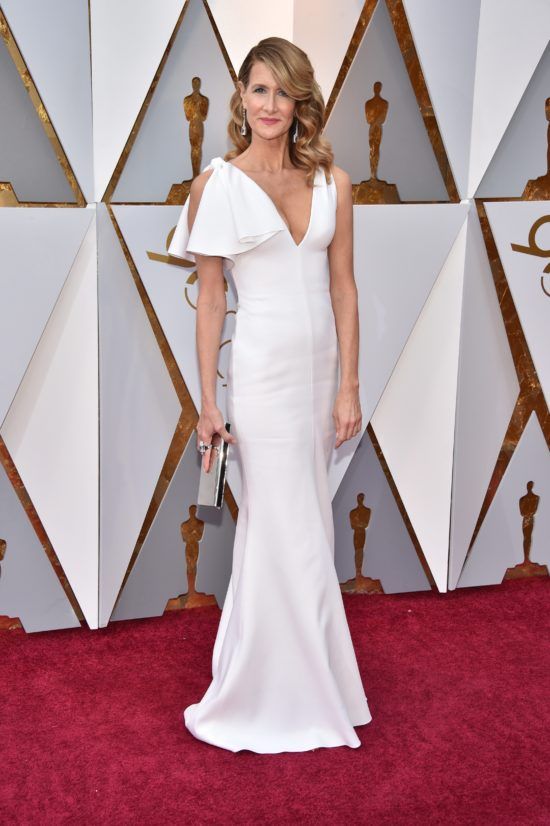 Lupita Nyong’o stunned on last night’s Oscar’s red carpet in this glittering gold number. The Versace gown featured a highly flattering sash that crossed the front of the dress with a layer detailing of black and gold mesh embellishment. The look featured flattering ruching along the hip and a feminine cap sleeve detailing. The entire look was ultra elegant and unique, which made this one of our favourites of the evening! 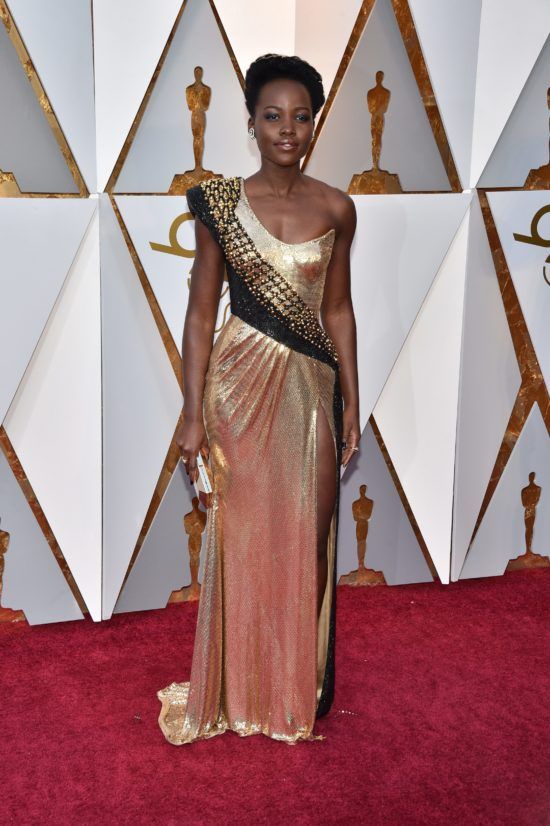 Tiered dresses are a difficult trend to pull off and can often end up adding volume to all the wrong places! Zoey Deutch, however, pulled off the tiered look flawlessly on the 90th Academy Awards red carpet. The Ellie Saab number featured a dusty lavender shade and unique embellishment on each tier which added a layer of visual interest and something different. 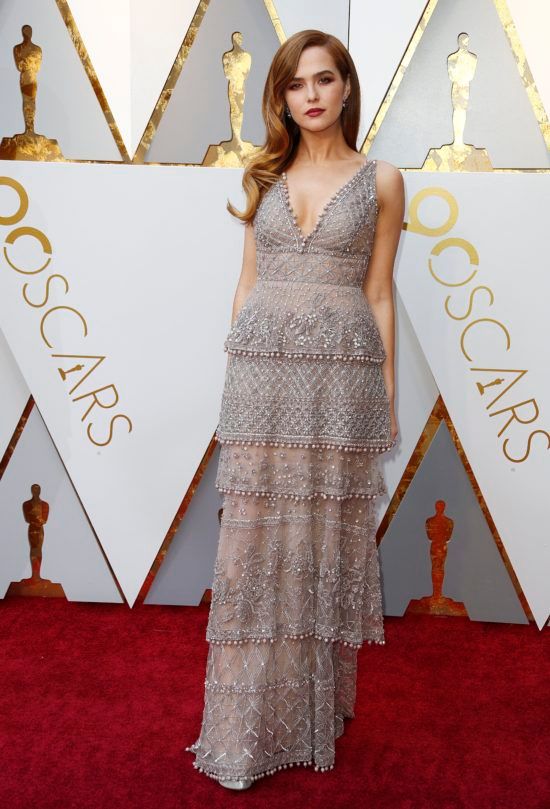 Sandra Bullock looked striking on this year’s Oscar’s red carpet while wearing this shimmering Louis Vuitton gown! The custom-made black and silver garment featured a flattering halter-neckline and a ruffled detail cascading from the hip. The captivating number was the perfect balance of elegance and edginess. 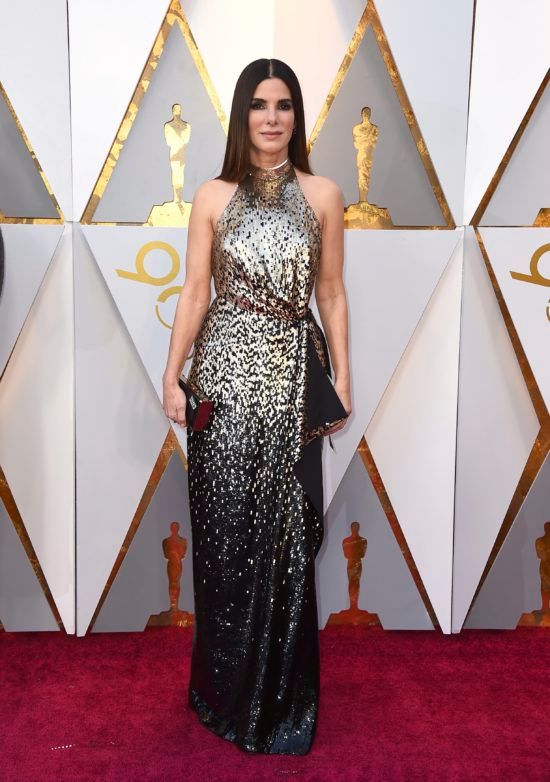 Eiza Gonzalez undeniably made head turns on last night’s red carpet in this show-stopping canary yellow number! The sun kissed actress looked like an absolute bombshell and the sleek gown hugged her hourglass figure in all the right places. The look featured glamorous cutouts along the sides that showed an appropriate amount of skin without looking tacky. We love that she topped this look with an unconventional red lip for something different and for added drama. 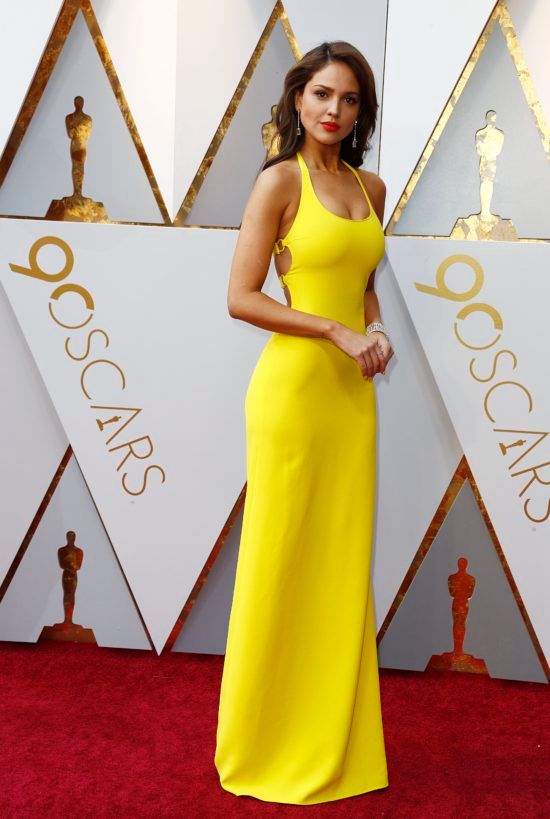 Jane Fonda looked sleek and sophisticated at last night’s Oscars in this dramatic white number! We love how crisp and fresh this feels yet it still feels quite glamorous with the dramatic shoulder detailing and sharp lines. She topped the look with a voluminous blowout hair style and drop-style diamond earrings for added glitz. 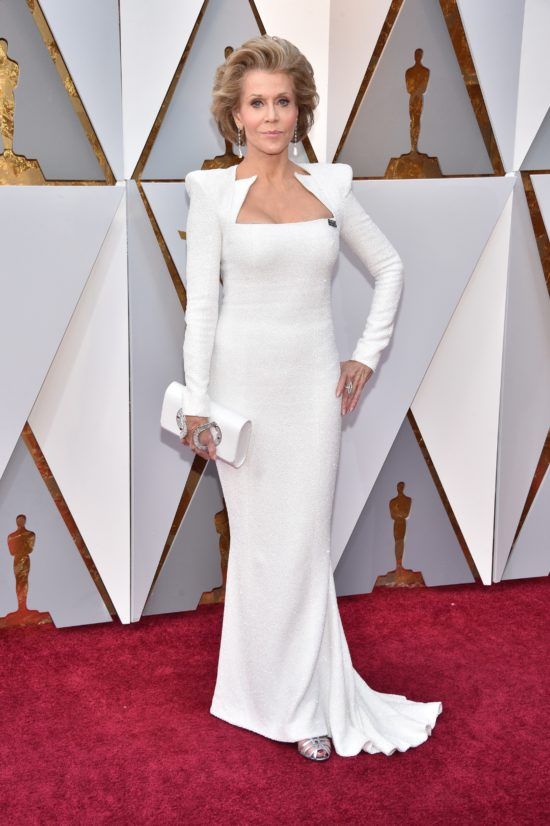 Octavia Spencer looked like an absolute gem on last night’s Oscar’s red carpet! Her chic emerald number featured a glamorous off-the-shoulder neckline which was super unique and elegant. We love this rich, jewel-tone on Octavia and especially love how well the flattering empire waist and draped neckline worked together. Allison Williams has landed on quite a few worst-dressed lists this past year, which made us all the more excited to see her step out in this head-turner! The champagne-colored Armani Prive gown was undeniably one of the most buzzed about looks of the evening. The soft color was the perfect contrast to Williams’ dark features and the floating neckline was super elegant and soft. We love all the embellishment and the flattering pleats — well done, Williams! Of all the looks from this year’s red carpet, Jennifer Garner’s most definitely stole the show. The brunette beauty stepped out in this striking cobalt blue number that featured an asymmetrical neckline and a dramatic cape which trailed elegantly behind her as she walked. This choice of color and cut couldn’t have been more perfect!