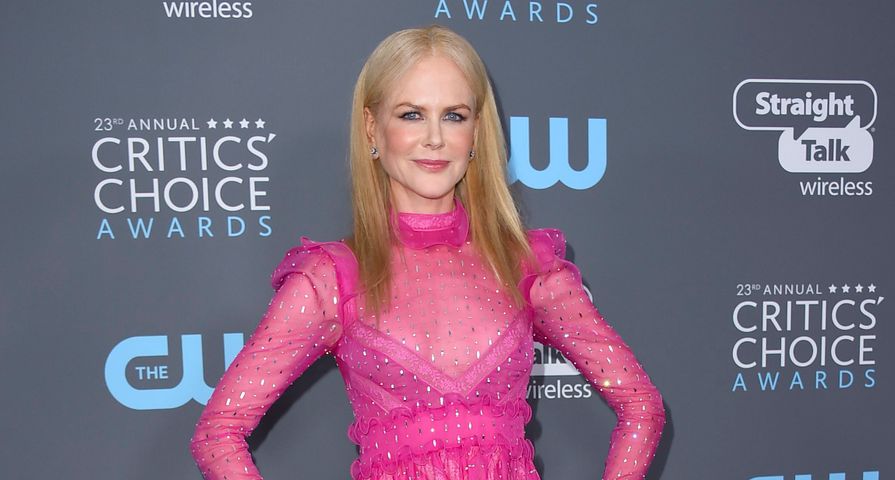 This year’s all-black Golden Globes red carpet was most definitely a hard act to follow in the world of red carpet fashion! The fashion moment was one that will go down in history and featured some pretty remarkable, standout dresses despite the monochrome color palette. It seems the all-black attire only lasted for one night, however, because the stars arrived at last night’s Critics’ Choice awards in a rainbow of sequins, feathers, and color, but unfortunately not necessarily for the best. Follow along as we recall 12 of the most disappointing red carpet looks from last night’s Critics’ Choice awards:

Angelina Jolie received quite mixed reviews over this white feathered number by Ralph & Russo! The custom design featured a body-hugging silhouette that had ruching and a thigh-high slit down one side. Many approved of the look by commenting that for once Jolie opted for a gown that was not black and the change was refreshing, but many also critiqued her by calling the feathers unflattering and too risky.

Jessica Chastain’s emerald look from last night wasn’t overly awful, but the shape seemed to drown her! We actually quite enjoy the contrast of the rich jewel tone with her red locks, but we wish she had chosen a more flattering cut that cinched her waist a little more. The cutout halter gown added volume in all the wrong places and didn’t add much shape to the lovely actress!

Alexis Bledel absolutely stunned in a black and white jumpsuit at the 2018 Golden Globes, but we can’t say the same about this powder blue number she wore for the Critics’ Choice! Her bow-detail shoes were adorable and the soft blue color of the gown made her icy blue eyes pop, but we can’t seem to overlook the strange neckline of this gown. The top of the dress seemed awkward with the strange black and blue layered neckline and the black sash around her waist made matters even worse.

Elisabeth Moss’ Erdem gown from last night was simply unflattering on the lovely star! The ankle length cut seemed to make the star appear shorter than she is and the fluttering sleeves and strange cutout detailing along the neck drowned her even more. We love the idea of the embroidery, but it seemed sporadically placed upon the dress rather than clustered in flattering designs. This dress most definitely didn’t do the beautiful blonde actress justice!

Country Music Awards’ Most Shocking Looks Of All Time

Allison Williams, unfortunately, had two worst-dressed moments in one week. First the Golden Globes orange-striped tassel look, now this awkward lace garment! We can definitely support a strong statement gown, but this particular Dolce and Gabbana garment seemed to be quite chaotic. There was embroidery, color-blocking, a sheer skirt, cutouts and a combination of strange colors that we wouldn’t typically think to pair together.

Kate Bosworth is a typical red carpet all-star, but her look from the Critics’ Choice Awards was definitely not one of her best! The lace garment featured a billowing hip detailing that was layered, puffy and overall quite awkward. The remainder of the dress featured a sheer skirt and sleeves but, despite this, the whole look seemed somewhat doily-like and overly covered up.

Reese Witherspoon is one of those stars we always expect to be on the best-dressed list at an awards show, but she, unfortunately, let us down with this look at the Critics’ Choice awards! The dress simply didn’t flatter her figure and the minidress style seemed somewhat casual for the formal awards show! She definitely looks polished and modest, but the entire look seemed quite safe and uncreative.

Margot Robbie’s look from last night’s Critic Choice awards was quite questionable! We’re all for mixing prints and textures, but the stripes and colorful bejeweled belt simply clashed rather than looking like strategic matching. The cut did nothing for her shape and the strange ruffles around the neckline and waist were quite risky. Luckily, Robbie held an award in hand and seemed happier than ever, so her dress choice didn’t seem to matter as much!

American Music Awards' 10 Most Shocking Looks Of All Time

Mary Elizabeth Winstead’s dress definitely was quite chaotic last night at the Critics’ Choice awards! The look featured a rainbow of colors from bright yellow, to blush pink to silver sparkles, and the colors just didn’t seem to blend seamlessly together! To make matters worse, the one shoulder number featured a dramatic bow detail on one shoulder that was undeniably over the top when considering how much was already going on with the rainbow colors.

The Unexpected Red Carpet Dresses Of Year's Past

Leslie Mann is known for taking risks on the red carpet, which we definitely can appreciate, but this particular bohemian number was unfortunately quite unflattering! Although the warm color palette pairs nicely with the star’s skin tone, the petite star seemed to drown in the voluminous balloon sleeves and unshapely cut.

10 Of The Worst Red Carpet Looks Ever!

Nicole Kidman was one of the Hollywood stars who was consistently best-dressed for years, but her last few looks have unfortunately let us down! Kidman commented on her 2017 Golden Globes look that many people disliked and claimed she allowed her daughters to pick the outfit which might have been the case with this fairy pink frothy look from last night’s Critics’ Choice awards! The color seemed quite juvenile and the ruffles along the skirt and sequins throughout made the look clash even more.

Kiernan Shipka definitely received some criticism for her look from last night’s Critics’ Choice awards! The colorful look featured a sequined tulle top with bows on the shoulders and a fluorescent train hanging down behind her. She paired the sheer look with a pair of pastel patterned pants and topped the look with metallic shoes. Although we appreciate the mermaid-inspiration behind this look, it simply didn’t pair well together in the end and came across a little too juvenile!