The Arrangement: 8 Things To Know 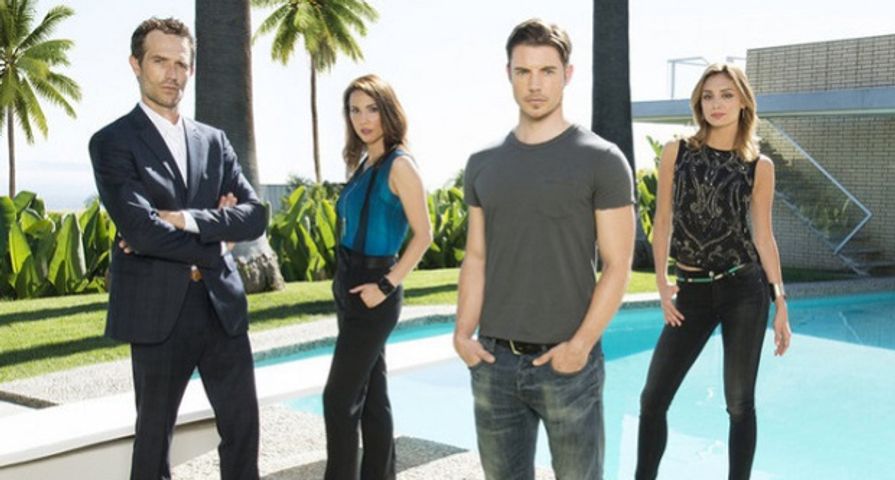 E!’s newest series, The Arrangement, is being billed as a romantic drama series that is “a Hollywood love story with a twist.” The Arrangement follows a young actress named Megan Morrison who is trying to get her big break in Hollywood. She ends up in an audition with Hollywood’s biggest star, Kyle West, and the two begin a romance. Before long, Morrison is offered a $10 million contract from West’s Institute for the Higher Mind to marry West, and it is up to her to engage in the facade or try to find out what West is hiding with the contracted marriage.

The Arrangement has actually been a long time in the making as the very first trailer for the series was released on May 16, 2016. E! ordered 10 episodes of the series in January 2016 and now the show is finally ready to premiere on March 5, 2017.

The Arrangement stars Christine Evangelista as Megan Morrison, an up and coming actress who meets Kyle West and is met with the contract that will change her life. Many TV viewers might recognize Evangelista through her recurring role as Allison Rafferty on Chicago Fire and Sherry on The Walking Dead. The 30-year-old was born and raised in Staten Island, New York and attended the Herbert Berghof School of Acting before landing her first credited role in an episode of Law & Order in 2005.

With Christine Evangelista in the lead female role, she has quite an amazing cast around her as well. Josh Henderson stars as her love interest and Hollywood star Kyle West. Henderson is best known form his recurring role as Austin McCann on Desperate Housewives, Brett Dolan in 2006’s Step Up, and most recently John Ross Ewing on the reboot of Dallas. The Arrangement also marks a big TV role for Michael Vartan who is best known for his role as Sam Coulson in the 1999 Drew Barrymore film Never Been Kissed. The O.C.‘s Autumn Reeser also has a part in the series along with Andromeda‘s Lexa Doig, rounding out an especially talented cast for the anticipated series.

When it comes to new shows, it always helps to look to the creator for an indication of what to expect from the series. The man behind The Arrangement is none other than Jonathan Abrahams who will also serve as an executive producer and write for the series. Abrahams has quite an impressive resume of series already behind him including being a producer for Mad Men, Perception and Murder in the First. The series also has Jimmy Fox from Objective Prods. USA, and Stephen Lambert and Eli Holzman from All3Media America. UCp producing.

While the trailer and premise for The Arrangement are very intriguing, the show has quickly drawn comparisons to Scientology and more specifically the marriage between Tom Cruise and Katie Holmes. The rumors that the show was based off the famous pair and the religion caused the creator and cast to speak out. “As far as the hole self-help organization aspect, there were a lot of inspirations for me,” Abrahams said of The Arrangement‘s Institute of the Higher Mind which is run by Michael Vartan’s character. “I’ve had experiences second and third-hand in self-help organizations…I have a lot of friends in 12-step programs. That was inspirational to me. All these things have something in common: this idea that the shackles of your past can be broken if you follow the steps.” Meanwhile E! released a statement that the show is not about Cruise and he wasn’t the inspiration. “The character of Kyle West is not at all inspired by anyone in particular. Kyle is a young, rising star who was recently left at the altar by his actress ex-girlfriend.”

While the Institute of the Higher Mind may or may not seem oddly similar to Scientology and there may or may not be comparisons between Henderson’s Kyle West character, there is at least some real life influence in the series. It seems The Arrangement might be exposing one of Hollywood’s oldest and often well-kept secrets: contract marriages. Some don’t believe in the Hollywood myth, but as Michael Vartan said in an interview for the series, [Contract marriages] have been going since the dawn of time in Hollywood.” Meanwhile the trailer shows Evangelista’s character asking, “You want me to play the girl on your arm so you can do what? What’s your big secret?”

The Arrangement will be without a doubt a unique series, and it came up with a very unique way to attract viewers. Due to the premise of romance, drama, and a marriage it did not go unnoticed that the series is in a way like ABC’s hit reality series The Bachelor, so the series created videos singling out Bachelor viewers. In a cross-over to real life, one of the videos has a representative from the Institute for a Higher Mind offering Nick Viall’s four remaining Bachelor contestants a proposition of leaving the show, and Nick, for a different marriage contract. Another video targeted the most recent contestant eliminated, Corinne, in a fun yet oddly strange blend of fiction and reality TV, but definitely a way to grab potential viewer’s attention.