Home » Entertainment » TV » Switched At Birth: 8 Behind The Scenes Secrets

Switched At Birth: 8 Behind The Scenes Secrets 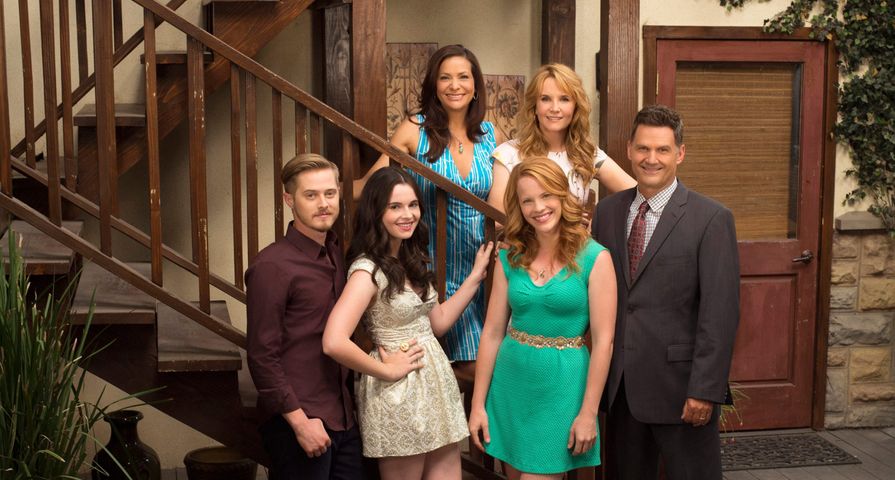 Switched at Birth was an incredibly unique teen/family drama series as it was the first TV series to have multiple deaf and hard-of-hearing series regulars. There were also scenes shot entirely in American Sign Language! The show tackles the nature vs. nurture debate as it followed two teenage girls who were switched at birth, grew up in two totally different environments and are reconnected later in life. After five successful seasons, Switched at Birth came to an end in April 2017. In honor of its recent series finale, here’s a look at 8 behind the scenes secrets from the show!

Many of the actors and actresses on set had to learn American Sign Language for the show, so producers had experts on set to teach those who didn’t know it and to make sure the sign language used by Katie Leclerc, Sean Berdy, Constance Marie and Marlee Matlin was similar. Vanessa Marano said she had a particularly hard time learning! “It was really hard for me to learn ASL. I did not do it fast. Everyone has been really nice like everyone’s super complimentary, like ‘Oh my god, you picked it up so fast, you’re doing so well.’ And I know they’re just like babying me to make me feel better,” she joked.

7. The Cast Members are Close

One of the great things about Switched at Birth was the amazing chemistry between all the cast members. This was as a result of the close friendships they made while working together. “When the show premiered we all went over to Luca’s house and had a nice little party and I baked a cake. It was really nice to see the final product amongst new friends. I was so excited to meet Lucas because I was a closet High School Musical fan, so to be invited to his house was really cool. Vanessa and I get along like peas and carrots; she is just stinking awesome and I love her to pieces! […] In the process of becoming a family on-screen we became one off-screen. That wasn’t anything I had expected, but I’m really grateful for that,” said Katie Leclerc, who played the character of Daphne Vasquez.

In an interview with Thought Co., Katie Leclerc said her favorite past time on set was playing games on her iPad. It was one of the first purchases she made with her money from the show. “When I got my first paycheck, the first thing I did was pay off my debt. The second thing I did was buy an iPad 2, so in-between takes I play all those super fun addicting games,” she said.

Meredith Baxter plays the role of Lea Thompson’s mother, but off screen she’s only 14 years older than her. Oddly enough, both of these actresses have played Michael J. Fox’s mother at some point in their career. Baxter was Fox’s mother in the show Family Ties, while Thompson was his mom in the Back to the Future trilogy.

4. How Katie Leclerc Prepared for her Role

Katie Leclerc has said she got the role of Daphne Vasquez because she was hard-of-hearing, and it makes her role on the show extremely believable because she can relate so well to her character. “I got the audition from my agent and really fell in love with this character very quickly. I have a lot in common with her and can really relate a number of different ways with her. I sat down with the writers and producers after I got the role and worked with the dialect coach to map out what Daphne’s hearing loss would be and what words she would be able to speak. That was probably the most challenging part for me. I had already learned sign language when I was 17. When I was 20, I found out I had something called Meniere’s Disease, which is a problem with fluid retention in the inner ear, and this helped me to be eligible for the role,” said Leclerc.

All of the cast members really related to their characters well, but Lea Thompson, who played the role of Kathryn Kennish, said she had a very big misconception about her character at first! “The funny thing about when they asked me to play Kathryn, I honestly thought she was the bad guy. She was the rich wife with the 2.5 kids, the fancy house and the fancy clothes. I thought she must be the bad guy, and Lizzy was like, ‘No, my mother’s name is Kathryn. She’s not the bad guy,'” said Thompson.

It’s pretty common for actors and actresses to take a souvenir home after working on a particular show for a long period of time. The actresses on Switched at Birth were no different! Katie and Vanessa both walked away with an unusual souvenir from the show — they took one of Kathryn’s ceramic squirrels! “On Switched, Katie and I both took squirrels. Because Katheryn Kennish has like a weird squirrel thing, and so there’s all these squirrels all over set, and there were these two squirrels that we wanted to keep so we took two ceramic squirrels. It’s not weird,” said Marano.

Vanessa Marano joked that the writers constnatly had to change her script because she ‘couldn’t do anything,’ especially if it was even remotely athletic! “We made these jokes at Switched at Birth all the time because they discovered that I literally can’t do ANYTHING. Like, they write in things and I can’t do it. Things like, I don’t know, anything athletic. Can’t do that. They wrote in me riding a bicycle, which I thought I could do, I was under the impression I could do, and then I ran into our boom operator. They literally are just like, ‘Why can’t you do anything?’ And I’m like, ’cause I’m a child actor and I can only walk and talk and hit a mark!” she said. One thing is for sure — she can act!