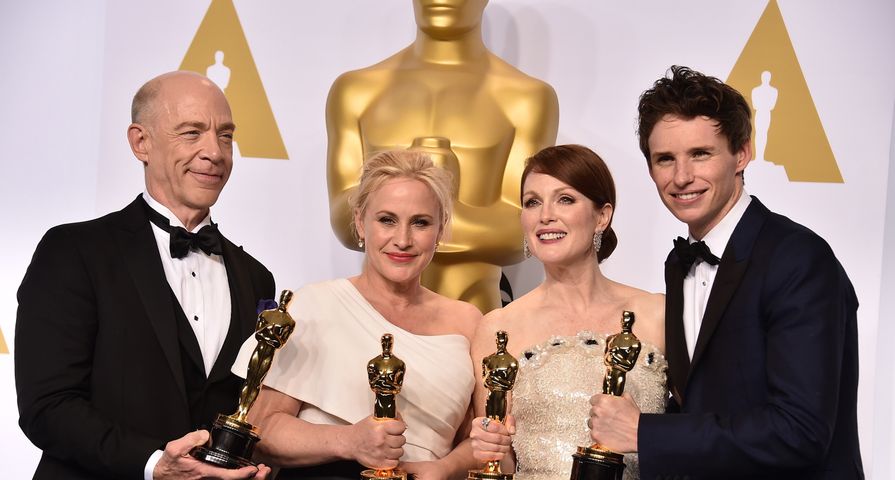 The 87th annual Academy Awards saw Birdman and The Grand Budapest Hotel as the evening’s big winners, with each film winning 4 awards at the Sunday night ceremony held at the Dolby Theatre in Hollywood. Budapest took home multiple awards in the technical categories, while Birdman beat out its main rival, Richard Linklater’s Boyhood, for the top prizes of Best Director for Alejandro G. Iñárritu and the coveted Best Picture trophy.

Boyhood, which was named Best Drama at last month’s Golden Globes, settled for a consolation prize early in the show in the form of a much-deserved win for Patricia Arquette in the Best Supporting Actress category. Arquette went on to give a rousing acceptance speech addressing the continued inequality of rights and pay for women in the United States, setting the tone for an evening filled with social and political activism on the minds of those in attendance.

In addition to Arquette’s win, the acting awards all went to the expected favorites. J.K. Simmons locked up the Best Supporting Actor award for his fiery performance in Whiplash, but none of that fire was on display for Simmons’s sweet acceptance speech, as he urged everyone to give their parents a call. For her portrayal of an Alzheimer’s sufferer in Still Alice, Julianne Moore finally won the Best Actress award after receiving 4 nominations in the past. Moore’s win was precursor to the Best Actor category, which saw Eddie Redmayne pull off a win for his convincing portrayal of ALS survivor and renowned theoretical physicist Stephen Hawking in the biopic The Theory of Everything.

While the unscripted moments are always the most interesting aspects of an Oscar telecast, the evening’s hired entertainment fell flat for the most part. Coming off multiple successful hosting stints for the Tony and Emmy awards, Neil Patrick Harris was largely forgettable in the same role at the Oscars. With the exception of a fun opening musical number, Harris’s routine was filled with unfunny jokes and awkward audience banter, a far cry from the group selfies and pizza deliveries that helped make the charismatic Ellen Degeneres a hit as host last year.