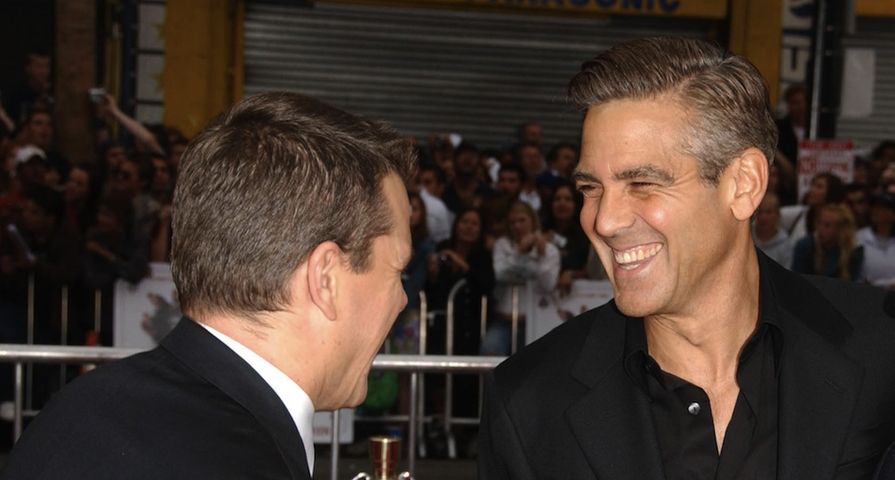 George Clooney loves pranks. And he loves offering them up to some of his favorite co-stars–especially the guys from his “Ocean’s” family. Matt Damon has become a particularly enjoyable target–as has Brad Pitt–in years past. The group of A-listers, enjoy the ribbing, but for Damon it genuinely became uncomfortable in the ribs.

While filming the soon-to-be-released The Monuments Men, George made nice with the wardrobe department, and asked the individuals on staff to do him a little favor. That favor: Take in Matt Damon’s high-waisted, period military pants little by little for several days running. Just enough that the actor would actually believe he was gaining weight, never suspecting anything different about the pants.

Matt Damon couldn’t explain the phenomena. George continued to turn the screws by asking Matt about his workouts, and if he was staying in shape during the production, which possibly served to frustrate, and definitely confuse his younger co-star. The best thing about the prank is that George had done it to Matt before, and Mr. Damon still remained relatively clueless. The kicker: George never let Matt in on the secret–he just continued to take enjoyment in his co-star’s ignorance. Matt learned about all of this when someone turned him onto an interview in which George dished the dirt.

George Clooney is probably Hollywood’s resident prank master. He has gotten some of the biggest names in the business with some of the best pranks ever. The guy once found a painting near a dumpster, adopted it, held on to it for a year while telling his friend Richard Kind, “I’ve been taking art classes,” then gifted the painting to Kind for his 40th birthday. And Kind left it hanging over a sofa, the only individual not in on the joke. Clooney… is the master.

To see Matt Damon’s take on the whole fiasco, check out the video below.