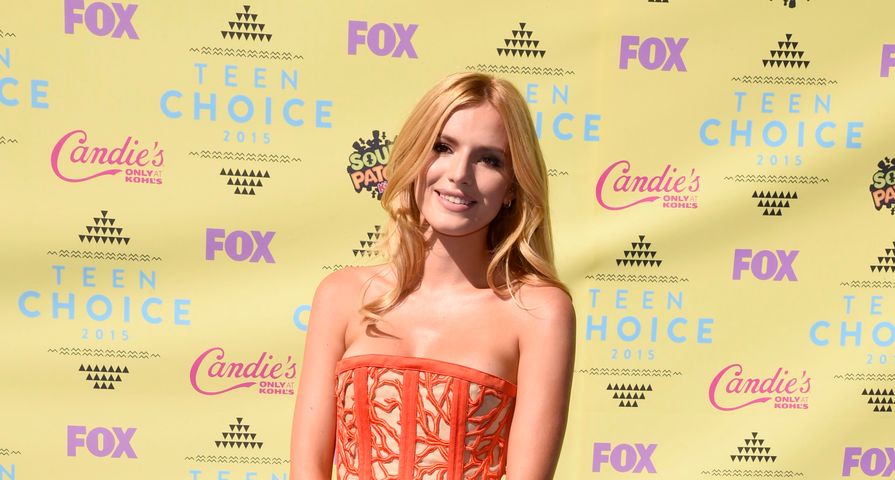 While awards season fashion is mostly covered during February and March for huge events like the Oscars and Golden Globes, the Teen Choice Awards held in August allow for a lot more fun, flirty and summery outfits, which the stars delivered in fine fashion for the show on Sunday, August 16. As per usual, some stars hit the mark when it came to red carpet fashion while others turned heads for all the wrong reasons but, when it comes to the best looks of the night, Bella Thorne, Nina Dobrev, Lucy Hale, Gina Rodriguez and Lea Michele outshone the rest.

Seventeen-year-old Bella Thorne has been dominating the red carpets after bursting onto the scene thanks to her big time role in the teen movie The DUFF. The gorgeous star rocked a coral Balmain mini paired with nude sandals and a rose-gold Lee Savage clutch and, while some complained her dress was too short for the event, she looked amazing and definitely won the red carpet, as well as the award for Choice Movie Villain.

Vampire Diaries star Nina Dobrev also stunned at the event in a glittery striped Zuhair Murad mini dress with perfectly tousled hair and simple makeup. She was also a winner inside when she became emotional for picking up the award for Choice TV Actress in the Sci-fi/Fantasy category after announcing she will not be coming back to the Vampire Diaries.

Always a fashion favorite, Lucy Hale did not disappoint as she also rocked a gorgeous minidress by Julien Mcdonald, which featured a deep v mesh neckline. The bold dress was set off by her matching black clutch and strappy heels, which also looked great on stage as she accepted the award for Choice TV Actress in the Drama/Action Adventure Category.

Gina Rodriguez has also became a fast fan favorite on-screen and in real life for her role in the CW’s Jane the Virgin and everybody was loving her red carpet look. The beautiful actress donned a textured silver frock by Alberta Ferretti, which was given all the attention as she matched it with nude pumps and minimal jewlery.

Last but not least is the night’s winner for Choice TV Actress  in Comedy, Lea Michele. In one of the best looks by far Michele rocked a strapless white Monique Lhuillier dress with gorgeous red and blue floral patterns. She added even more color with perfect red pumps.