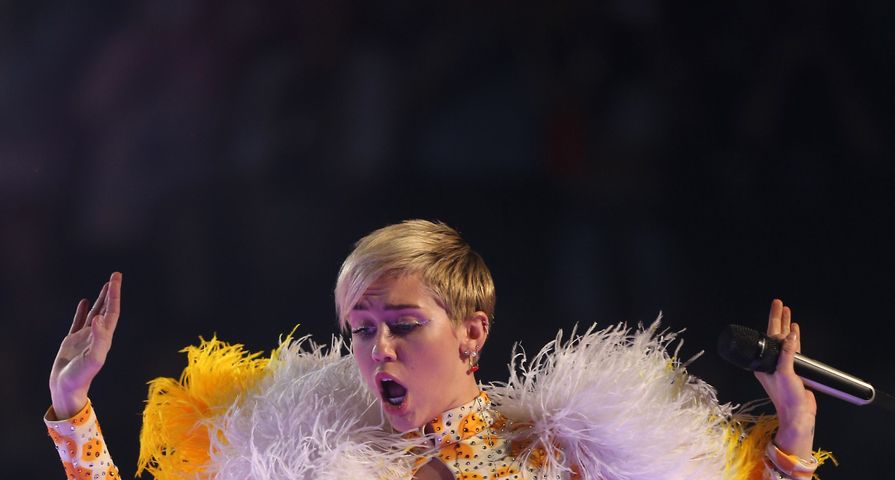 From Hannah Montana to wrecking-ball riding pop-star, 22-year-old Miley Cyrus has worked her way up the fame ladder and is now the host of the upcoming VMAs. Love her or loathe her, you have to admit that Miley isn’t necessarily a safe call when it comes to the choice of host. Granted, that could be just what the producers are hoping for, but here are 8 reasons Miley Cyrus shouldn’t host the VMAs.

When Miley Cyrus announced via Twitter that she was hosting the VMAs, she was her usual eloquent self. “F*ck yeah VMAs!!!!!” Not terribly shocking in itself, it is in Miley’s signature style and no one wants to have to listen to an hours-long broadcast that is filled with annoying bleeps to cover up not-for-TV vocab. She’d be better off leaving the lavish language on the web.

The same Twitter announcement had Miley Cyrus dressed in a bright green alien outfit with signs stating that “MTV WON’T LET ME PERFORM / SO I’M HOSTING THIS YEAR’S VMAS.” Performing out, hosting in. Hmm. If the VMAs think they’ll be able to reign Miley in with a strict contract and iron-clad agreement, they’re either sticking their heads in the sand or are going to end up stifling her into one heck of a boring hosting appearance that will be completely and utterly un-Miley.

6. Tired Of The Tongue

5. Wild Child Is The Safe Bet

As wild as Miley Cyrus can be, it feels like the VMAs were playing it safe when they made their choice. Going for someone who will do her best to glitz and glam and flit and flash the crowd into a dazzled haze, Miley may have only been selected because she’s one of a handful making their mark through bold, brash, in-your-face brands.

Ten million viewers watched back in 2013 when Miley Cyrus made her most famous VMA appearance to date performing “Blurred Lines” along with Robin Thicke. She stuck out her tongue (of course) and while bending over with Thicke behind her, twerked her way to the top of the most-talked-about action of the night. Perhaps by choosing Miley as this year’s host, the VMAs are hoping to tap into that 10 million again, but let’s hope it comes without the twerking blurred lines.

Nicki Minaj followed up the VMA nominations by calling out the awards show for their lack of diversity when it comes to the female performers nominated. “If I was a different “kind” of artist, Anaconda would be nominated for best choreo and vid of the year as well… If your video celebrates women with very slim bodies, you will be nominated for vid of the year.” Her tweets reflected the fact that she received zero nominations whereas Taylor Swift received nine and pointed “out the ways in which black women are still sidelined by the music industry, even as white feminism is beginning to be embraced,” according to The Independent. Miley is all well and good, but if they’re going for a fierce female how about letting Nicki take the stage as host?

2. Ya Gotta Pay Your Dues

Miley Cyrus may have made her name with her few hits, her wild antics, and her bold beliefs, but has she paid her dues? There’s no doubt that she makes headlines and is willing to do what it takes to make her career last, but at 22 she still (potentially) has a long career ahead and it’s never good to peak too early.

As host of this year’s VMAs, Miley will no doubt entertain, but will she also overshadow? The host of the show should move things along with ease and expertise while keeping the audience entertained. Miley can do this in spades. The host also needs to be able to step back when the winners take the stage and let them shine in their big moment. Can Miley do that? At the end of the night, who will be on everyone’s lips, the winners or the host?