The Duke and Duchess of Cambridge stepped out for a reception in Dublin during their three-day royal tour of Ireland. For the occasion, the royal duo dressed to the nines, but Kate Middleton’s ensemble was particularly noteworthy for a special reason.

The Duchess opted for a magenta pink midi-length number by Oscar de la Renta which featured a black polka dot print and a ruffled collar. She paired the dress with an elegant black clutch, black heels and a pair of gold hoop earrings. For her beauty look, Kate pulled her hair back into a bouncy ponytail and left pieces loose to frame her face.

With this look, we can’t help but think that Kate pulled inspiration from Princess Diana’s style in the ’80s. The ruffled collar, polka dot print, and bright magenta color were go-to styles of the late Diana during her royal reign. Diana actually wore a very similar dress to Kate’s in 1985 which featured a nearly identical cut, print, and design.

Check out the comparison photos of Kate and Diana’s looks:

Check out Diana’s ’80s version of this look: 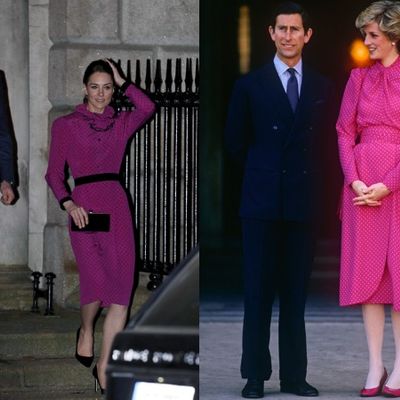