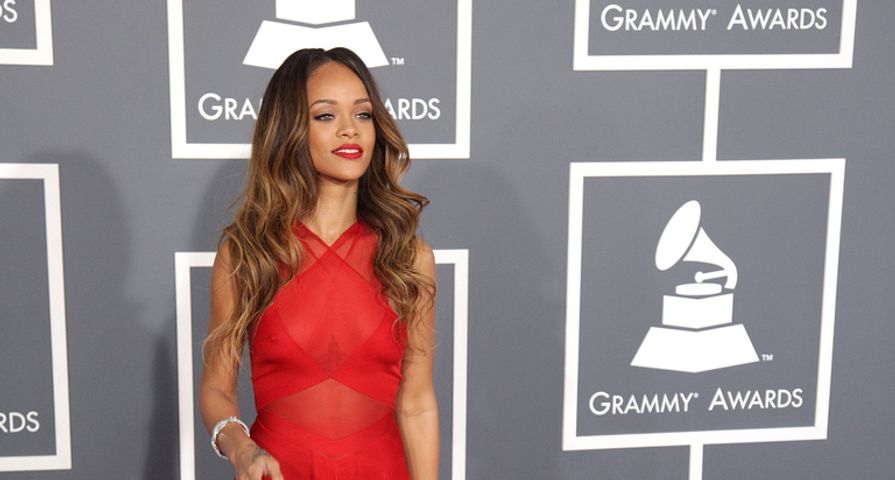 The Grammy Awards aren’t really like any other award shows. Celebrities don’t dress as crazy as at the MTV VMAs, but they definitely don’t dress as conservatively as is expected at the Academy Awards. Even though celebrities can take fashion a little further at the Grammys, it doesn’t mean that they can totally ignore all the basic rules of fashion. The Grammy Awards are coming up this weekend and we thought that now would be a good time to take a look at which celebrities have gotten it right on the red carpet over the years. Here are 7 best dressed celebrities from years past!

Carrie Underwood brought her A game to the 55th Annual Grammy Awards. She donned this black strapless lace embroidered Roberto Cavalli gown, which featured a mermaid silhouette and a sweetheart neckline. She accessorized with a 380-carat diamond necklace from Johnathon Arndt. She didn’t necessarily need the necklace – the dress had enough beautiful detailing as it was. However, adding some extra bling never hurt anyone.

At the Grammy Awards, the country singer performed a medley of her no. 1 hit “Blown Away” and her latest single at the time “Two Black Cadillacs.” She wore a different dress for her performance – an LED one. As she sang, different images were projected onto the dress. “There’s so many big performances at the Grammys,” she told reporters after the show. “I just like to stand still and sing sometimes. So this was the best way to do that, and it still created something visually attention-capturing and beautiful.”

Miley Cyrus looked chic and sexy (we never thought those words would be used to describe Miley) at the 52nd Annual Grammy Awards. She rocked this denim Hervé Léger by Max Azria Spring 2010 bandage dress with black strappy Balenciaga sandals and a matching box clutch. These days, the controversial pop star doesn’t quite do it up in style like she used to. She seems more interested in being shocking, which has resulted in her making a number of unstylish choices.

The former “Hannah Montana” star has admitted that she is aware of the fact that she doesn’t dress appropriately anymore, but she doesn’t care. “I always tell people, I don’t have to wake up and go work in a normal office,” she told The Kit. She thinks that because she has young fans she can dress in any way she wants. We miss her old sense of style. Now we can only put her on best dressed lists for things she wore five years ago!

This green Gucci Resort 2013 dress that Katy Perry wore to the 55th Annual Grammy Awards is the right amount of sexy and outrageous. It is so tight and kind of revealing – the embellished keyhole isn’t supposed to gape that much. With those kinds of curves though, it is to be expected.

This was the same year that CBS – the station that aired the Grammy Awards – asked all celebrities to dress more conservatively. “Please be sure that buttocks and female breasts are adequately covered. Thong type costumes are problematic. Please avoid exposing bare fleshy under curves of the buttocks and buttock crack. Bare sides or under curvature of the breasts is also problematic. Please avoid sheer see-through clothing that could possibly expose female breast nipples. Please be sure the genital region is adequately covered so that there is no visible “puffy” bare skin exposure,” CBS wrote. Perry may have broken the rules, but it was only a slight offence!

Kelly Osbourne shimmered at the 54th Annual Grammy Awards in this metallic gown by Tony Ward. She accessorized with heels by Giuseppe Zanotti, and jewelry by Pomellato. We think the dress gave the right amount of sparkle and sophistication.

The host of “Fashion Police” has come a long way since she first established herself as a reality star on her family’s hit MTV show “The Osbournes.” She was really interested in making it as a singer back then. She’s totally turned her back on that and is now a budding fashion designer who is launching her first collection – Chapter One. “My collection is called Chapter One and then we’ll go onto Chapter Two as we develop,” Osbourne said. “My mission is not to be the number-one fashion designer in the world. I’m not trying to change or come up with anything that people haven’t already done. I’m just trying to make fashion fair and make good quality basics available to all women,” she said.

Taylor Swift has become one of the best dressed celebrities in Hollywood. In 2012, she was already well on her way. At the 54th Annual Grammy Awards, she sparkled in this Zuhair Muard Fall 2011 Couture gown, which featured a high neckline, cap sleeve, gold beading, cutouts in the back and a flowing train. It was a pretty mature look for the sequin-loving starlet; however, we’ve come to expect this kind of fashion from her.

Other young starlets actually look up to the “Shake It Off” singer as style icon. Greer Grammer – who has a role on MTV’s “Awkward” – is one of them. “Right now, it’s Taylor Swift. Everyone likes Taylor Swift. [I love her] street style – the way she dresses. She’s very chic, classy and girly. I’m really girly too. I love her red lips.” Swift’s BFF Karlie Kloss is also a fan. “She’s got great style. I need to take some notes from her!” she told People magazine.

Allison Williams dazzled at the 55th Annual Grammy Awards in this strapless column gown by Kaufmanfranco, which was reportedly encrusted with black diamonds. This is definitely one of the more glamorous of the Grammy dresses. We could actually see Taylor Swift wearing a dress like this – that girl loves her sparkles and sequins!

The “Girls” actress had a rather surprising date for the Grammy Awards – Katy Perry. A few days before the show, she had told Anderson Cooper on “Anderson Live” that she would be going with the pop star. “I am going to the Grammys and Katy Perry is my date,” she said. “She’s the hottest date. She’s a friend of mine and she’s nominated, as she should be. I can’t wait to go.” They walked the red carpet together and were met by their real dates inside – Perry joined John Mayer and Williams met up with her boyfriend Ricky Van Veen.

Rihanna looked stunning and sophisticated at the 55th Annual Grammy Awards. She rocked this crimson gown by Azzedine Alaia, which featured a structured bodice, sheer panels and a dramatic train, with Neil Lane jewelry and Manalo Blahnik heels. When we see the “Umbrella” singer looking this beautiful, it is hard to believe that she can sometimes get it so wrong on the red carpet. We think that she makes a far better impression when she goes glam as opposed to when she bares all.

We’re thinking that she may have chosen this custom-made gown to get a certain someone’s attention at the Grammy Awards. She and Chris Brown were reportedly acting very much like a couple at the event. It was only four years earlier that he was charged with assault and making criminal threats for attacking her after a pre-Grammy party. A lot can obviously change in four years.