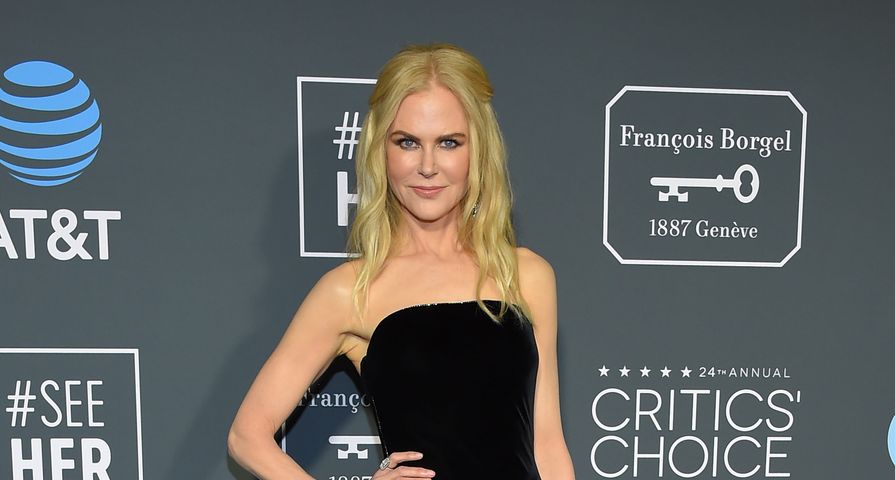 The 2019 awards show season officially kicked off earlier this month with the Golden Globes awards and up next was the annual Critics’ Choice Awards. The event, held in at Barker Hangar in Santa Monica, California, brought some of the most talented stars of the film and television industry under one roof for an evening of celebration. While the glamorous affair brought quite a few striking red carpet moments that left us in awe, there were also a few that left us disappointed. The disappointing looks are often those that come from stars we had high expectations for, but they simply don’t hit the mark. Follow along as we retrace the 12 most disappointing looks from this year’s 2019 Critics’ Choice Awards.

Gemma Chan has had quite a few stunning red carpet looks for the past few awards shows. She nailed her Golden Globes look in a stunning teal shorts-and-dress hybrid look, but we can’t say we’re as big of fans of her Critics’ Choice Awards look. The floral print dress seemed quite heavy and chaotic. 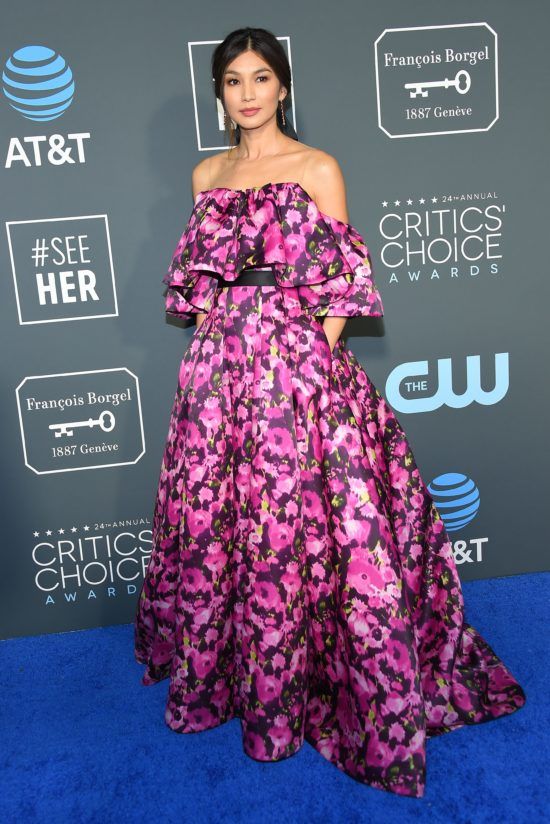 Julia Roberts is another star who favors hybrid looks on the red carpet! She wore a pants-and-dress combo for the Golden Globes and something similar to the Critics’ Choice Awards. While we by no means dislike this look, we simply would have preferred if she had opted for a different style since she wore such a similar look for the Golden Globes. 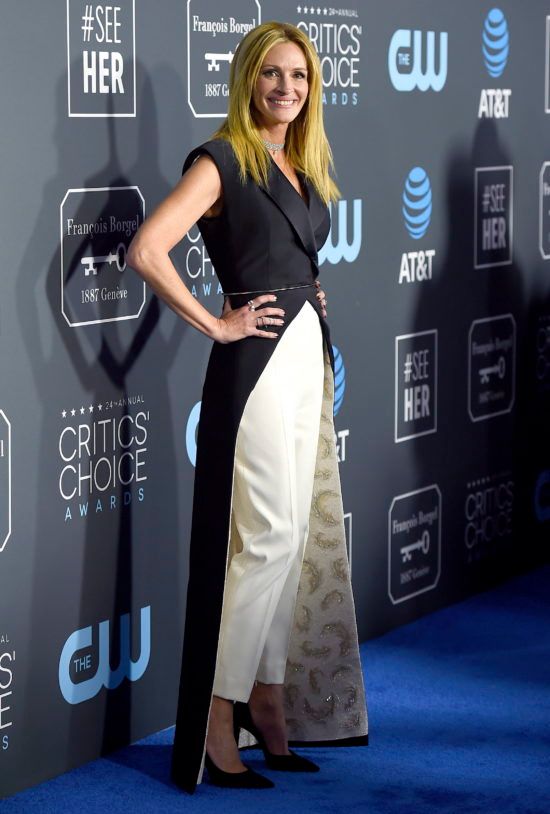 Amy Adams’ look for the Critics’ Choice Awards this year was quite disappointing! The talented actress had quite the special evening after winning the Actress in a Movie/Miniseries category and we simply wish she opted for a glamorous dress to match. Her look was simple, casual and didn’t feel special in any way. 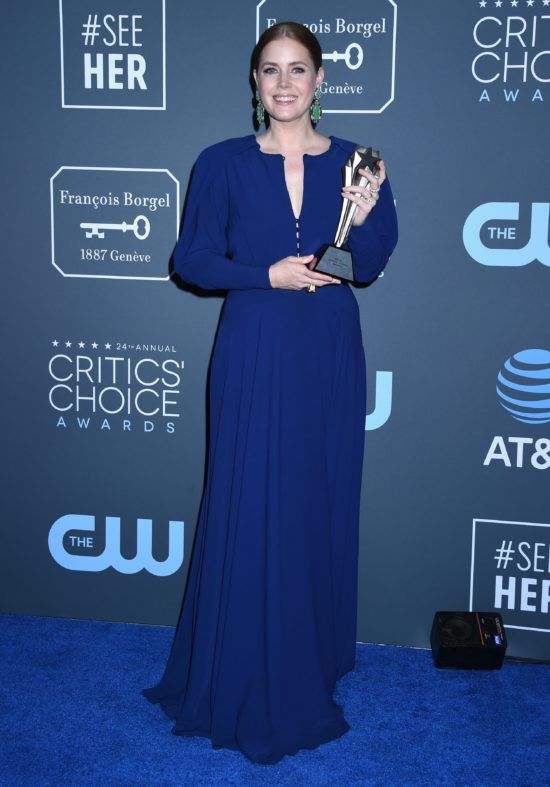 Connie Britton is such a natural beauty that she could seemingly pull off any style of dress, but this look proves otherwise. As big of fans as we are of Connie, this look was not her brightest choice. The lime green in combination with sequins seemed an odd matchup. 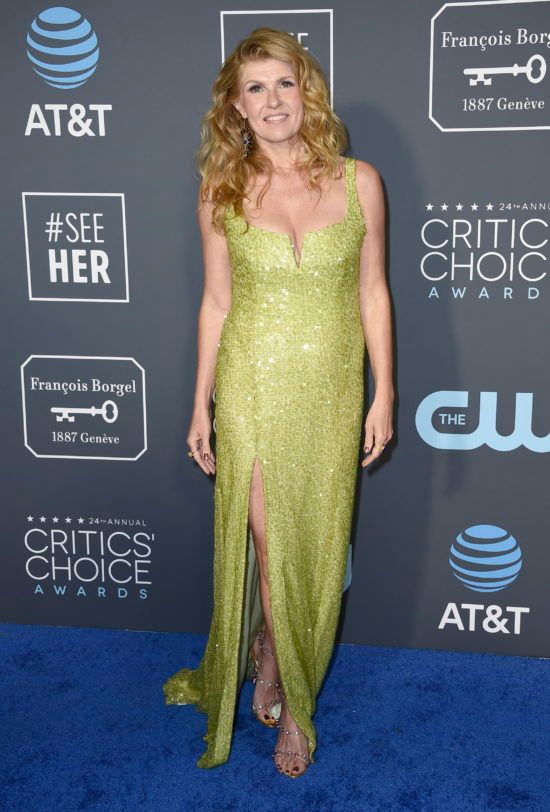 Sandra Oh absolutely killed the fashion game at the 2019 Golden Globes where she wore a variety of looks as a co-host of the event. For the Critics’ Choice Awards, however, we’re not sure how big of fans we are of her look. While the monochrome dress itself is nice, especially contrasted with her emerald accessories, her long bangs and curled locks made her appear nearly unrecognizable, which was a little disappointing. 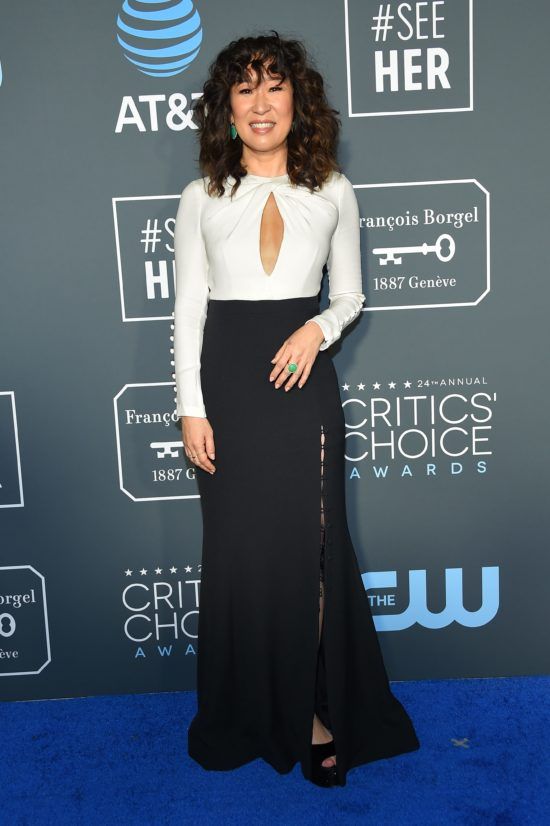 Nicole Kidman had an unfortunate miss at this year’s Critics’ Choice Awards wearing a monochrome Armani Privé dress. While we love the sleek shape of this dress, the unsightly white ruffle along the skirt was quite distracting and unnecessary. Kidman tends to be unpredictable when it comes to her fashion, but we had higher expectations for the Critics’ Choice Awards after her stunning wine-colored Golden Globes look. 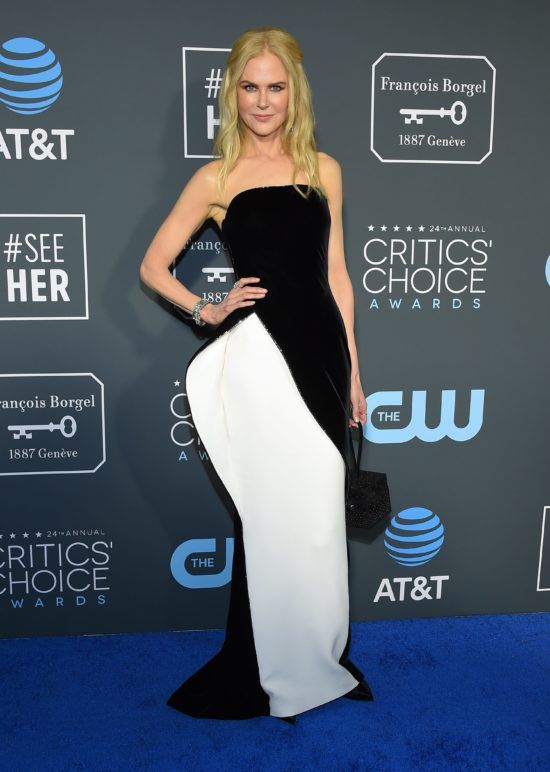 We were quite puzzled and let down when we saw Maggie Gyllenhaal’s dress of choice at this year’s Critics’ Choice Awards. The silky Prada gown was a bizarre shade of light greenish-yellow and the sleeve detailing left many fashion critics quite puzzled. 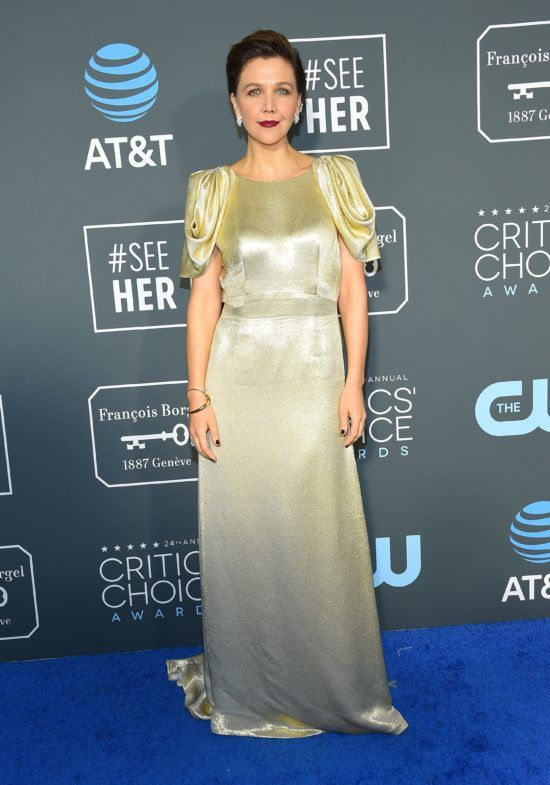 Nina Dobrev is a natural beauty, which is why she doesn’t need much embellishment when it comes to hitting the red carpet in style. This red lace number she wore to the Critics’ Choice Awards simply felt distracting and heavy on the star which was quite the letdown. We prefer to see lace incorporated in a subtle, dainty way rather than feeling overdone with ruffles and a bright color. 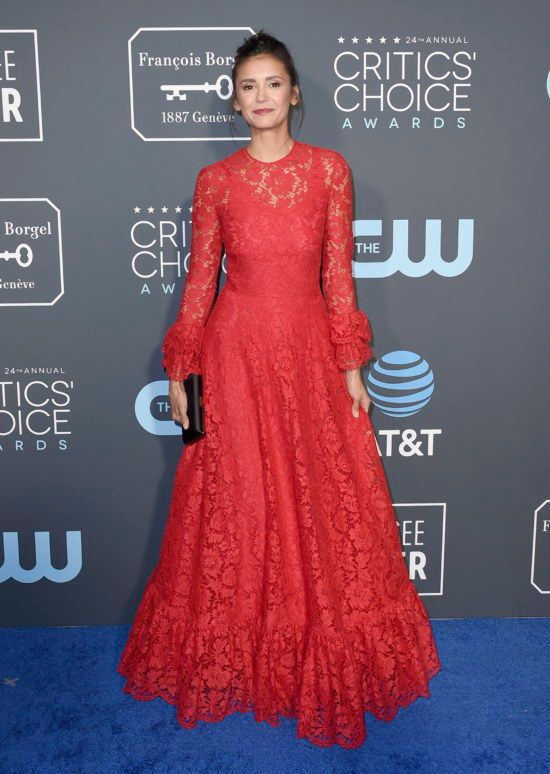 We have to admit we weren’t in love with the look that America Ferrera wore to the Critics’ Choice Awards this year. Tuxedo dressing is one of our favorite styles of red carpet ensembles, but this look just missed the trend. The cropped blazer jacket was quite outdated looking and really detracted from what could have been a sophisticated suit dressing moment. 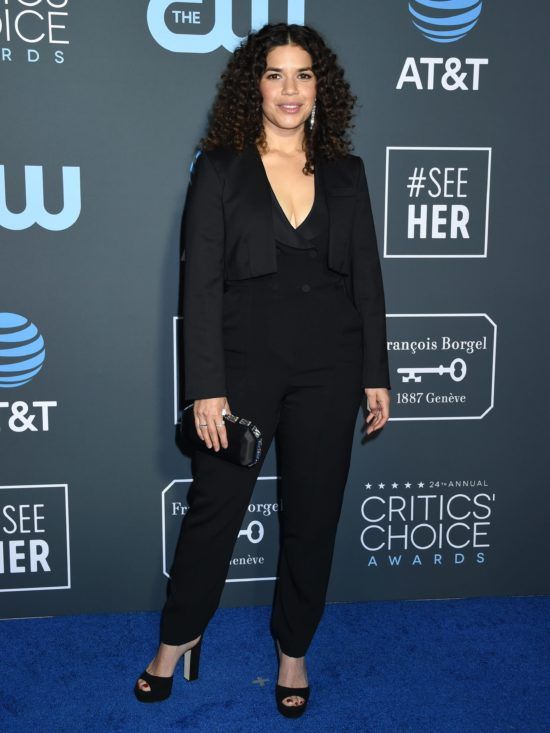 Judy Greer definitely missed the mark with her red carpet look for this year’s Critics’ Choice Awards. Greer had a highly questionable fashion moment at the Golden Globes earlier this month, which is why we were saddened to see she struck again at the Critics’ Choice Awards. Her Reem Acra dress featured voluminous elbow-length sleeves and a heavy print. The look was just overall quite overwhelming! 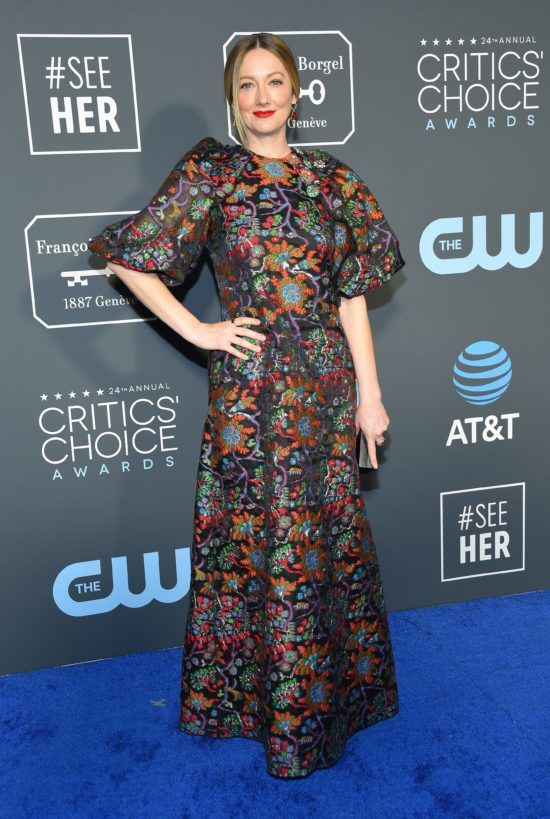 Elsie Fisher is only fifteen years old, but her style of dressing does not lead you to that conclusion! Whoever is styling Fisher seems to have favored a far too mature wardrobe for someone so young. We are disappointed that Fisher is opting for heavy suiting and makeup rather than fun, youthful dresses and flowy ensembles. 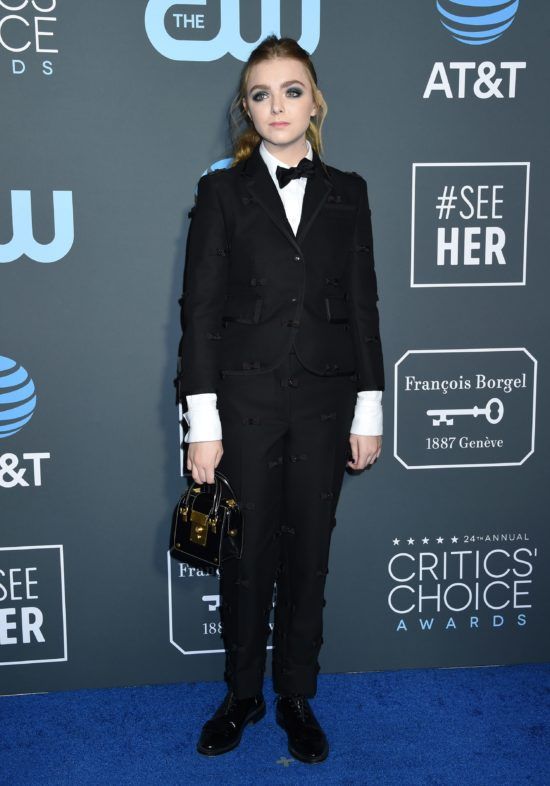 As much as we love Glenn Close, this outfit was definitely not her best. The satin texture was on the right track, but the proportions of this look were totally off. The blazer was too long and seemed to drown her, especially in combination with the heavy pleated skirt. 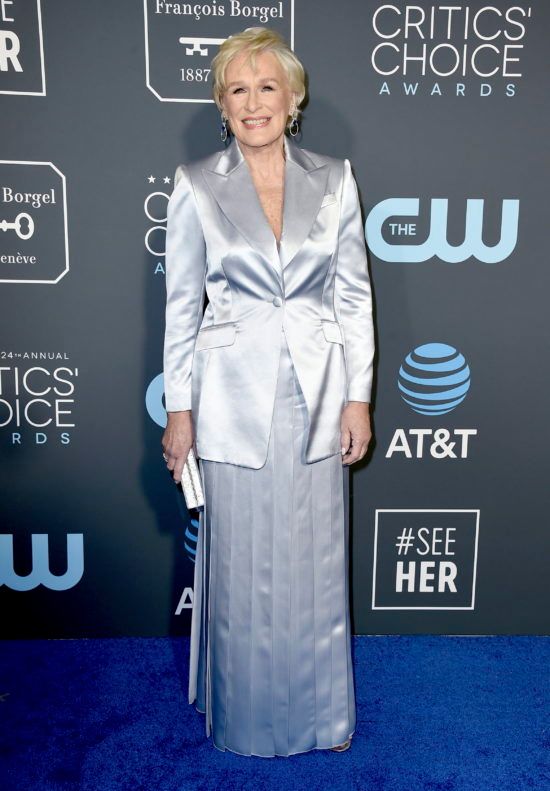