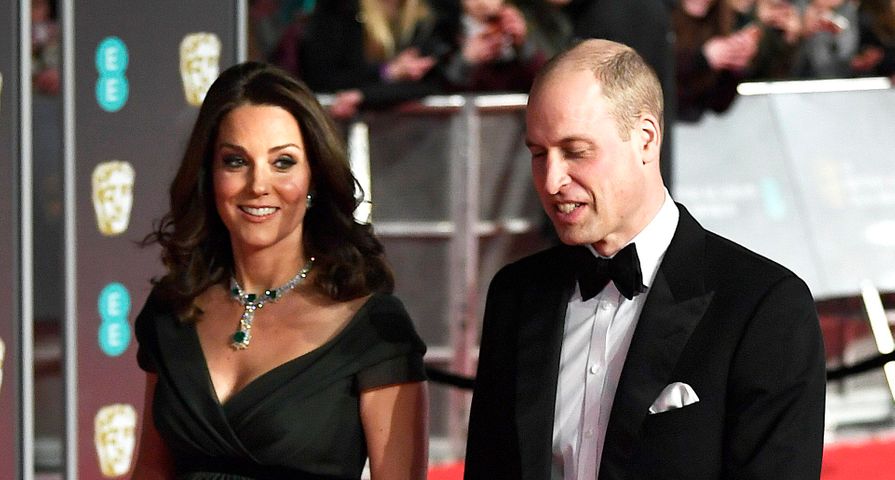 The stars of the silver screen hit the British Academy Film Awards red carpet last night wearing some of the most luxurious designer garments. The A-listers showed up in a sea of black in honor of the 2018 #TimesUp movement and looked absolutely stunning nonetheless. To find out who the best-dressed of the evening was and the reason behind the one star who opted for a shade of dark green instead, be sure to follow along below:

Although Lily James has previously played the whimsical Cinderella on screen, the gorgeous star proved at this year’s BAFTA awards that she can also rock a daring black look. Her princess-style gown featured a luxe silk texture and a full organza skirt covered in tiers and beading. We especially love the flattering corset-style of this bodice which pairs perfectly with the chunky, sparkling belt detail. 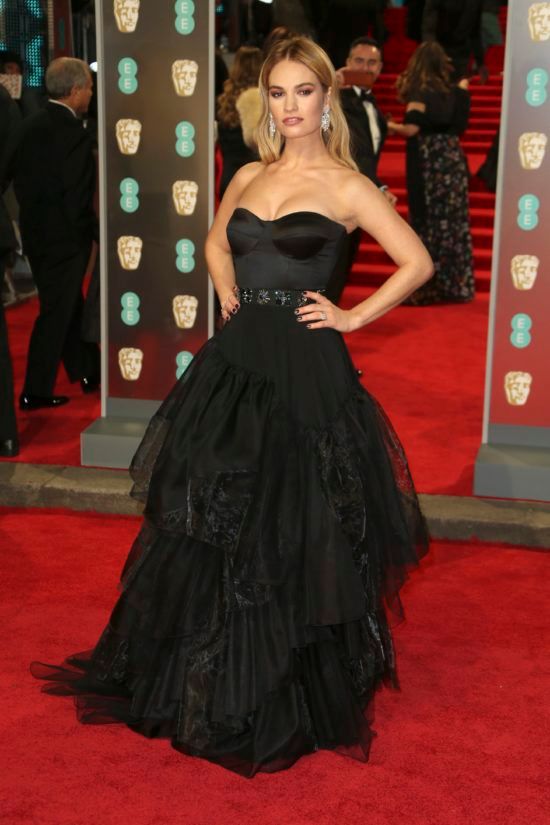 BAFTA Awards 2019: All Of The Best & Worst Dressed Stars Ranked

Styling a baby bump can definitely be an added challenge on the red carpet, but actress Rebecca Ferguson did so flawlessly at this year’s BAFTA awards! Ferguson opted for a sleek black gown that featured a dramatic cape detailing which trailed behind her and brought some serious Hollywood glamour. The thigh-high slit showed an appropriate amount of skin and the sophisticated cut of this dress was super flattering and elegant. 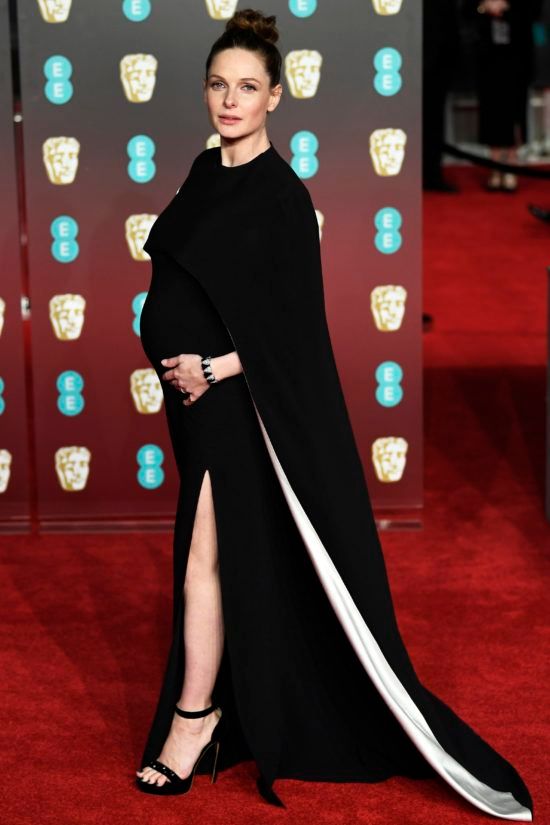 Salma Hayek rarely goes wrong on the red carpet and her look from this year’s BAFTA awards was no exception. The star opted for an embellished black gown that featured trendy floral embellishment along the waist, shoulders and arms. We love that the beaded designs add something extra and unexpected but the dress is still a timeless cut and sophisticated design. 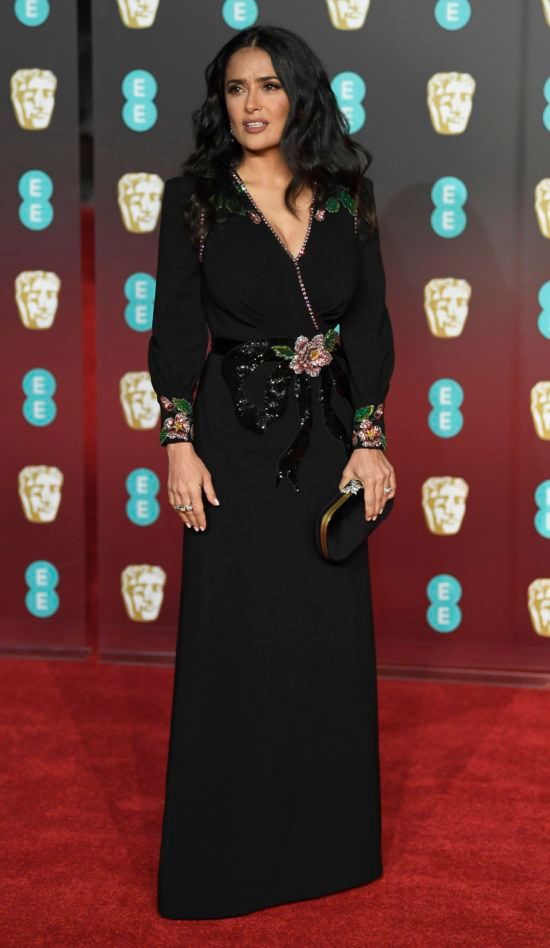 Sairose Ronan is never one to go the traditional route with her red carpet looks and we love the risk-factor involved with many of her red carpet appearances. This particular gown featured a sheer skirt, sparkled bodice and feathered skirt that all worked together perfectly. The subtle peek of leg adds a demure sex appeal that isn’t as obvious as a low cut neckline would be and we love that about this look. 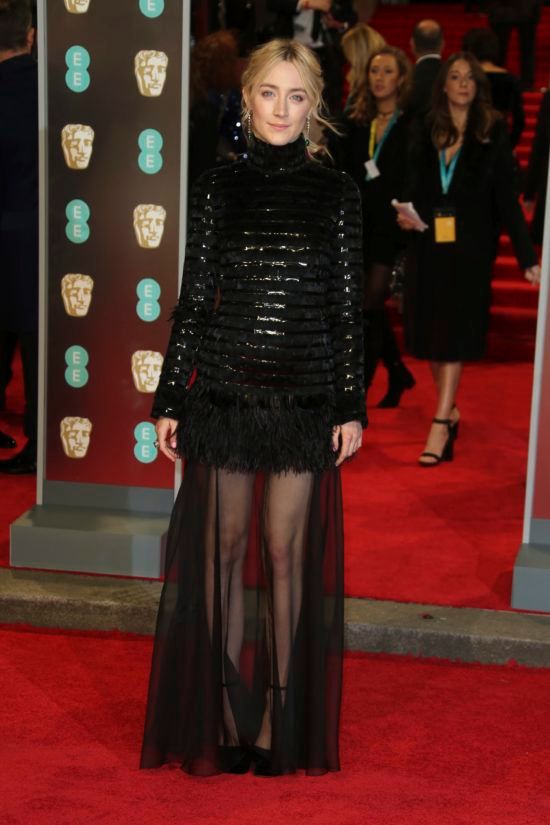 Naomie Harris is one of Hollywood’s biggest trendsetters and her look from the BAFTAs definitely proves that! Harris broke boundaries by rocking a long, sheer tunic over skinny pants rather than rocking a traditional floor-sweeping gown. Her look definitely had the Hollywood glamour factor and was quite dramatic with the full-coverage beading, fringe sleeves and plunging neckline. In our opinion, the risk was definitely rewarded and Harris looked absolutely stunning! 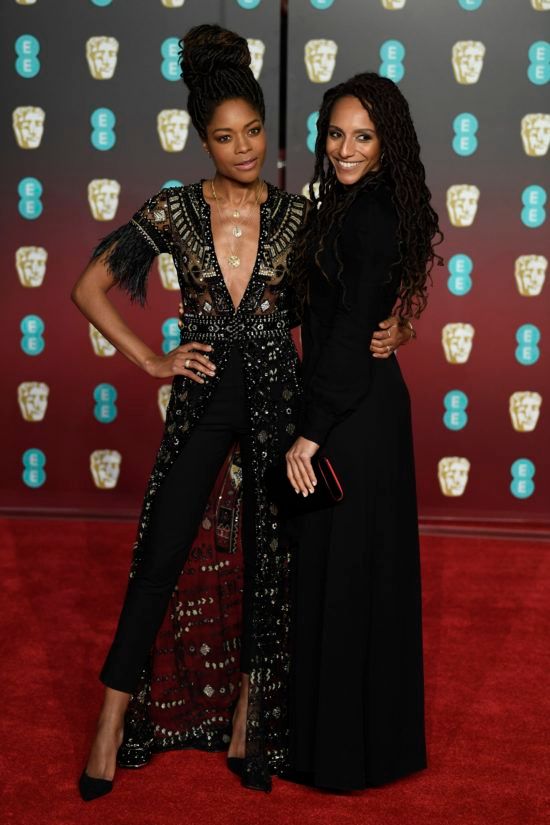 Kate Mara stepped out at last night’s BAFTAs in a black number that featured golden beading throughout. The strapless gown was definitely flattering and we love how the pattern shifts at the tiniest part of her waist to highlight her petite frame. The gold was a nice touch in the sea of black and the pop of red on her purse definitely helped her to stand out even further. 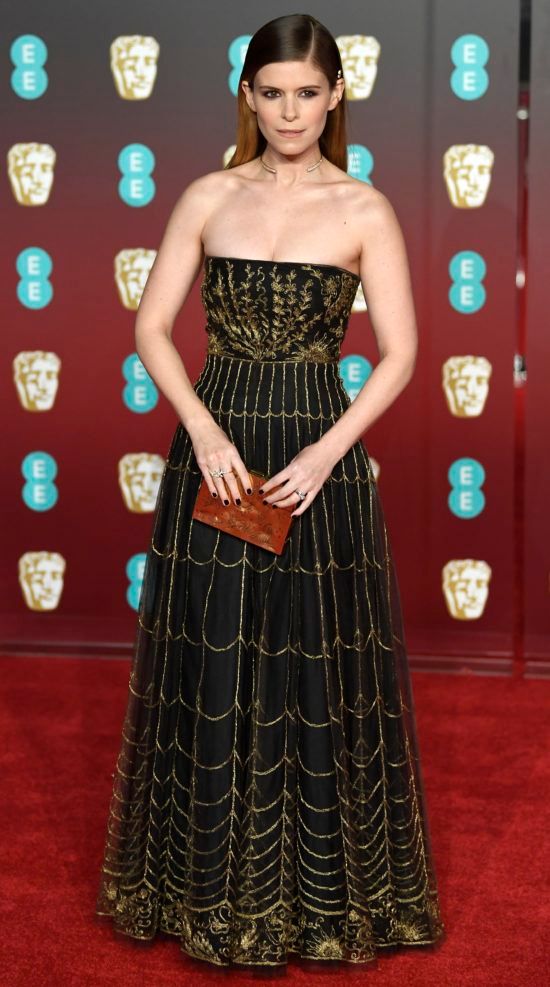 Emma Roberts looked as elegant as it gets on last night’s red carpet where she stepped out in this sophisticated, plunging number. We love the exaggerated shoulders on this look and think that it really balances out the revealing low-neckline and high slit of the garment. Roberts sleeked her hair into a bun and rocked a pair of dramatic chandelier earrings which really pulled the look together and added extra sophistication and class. 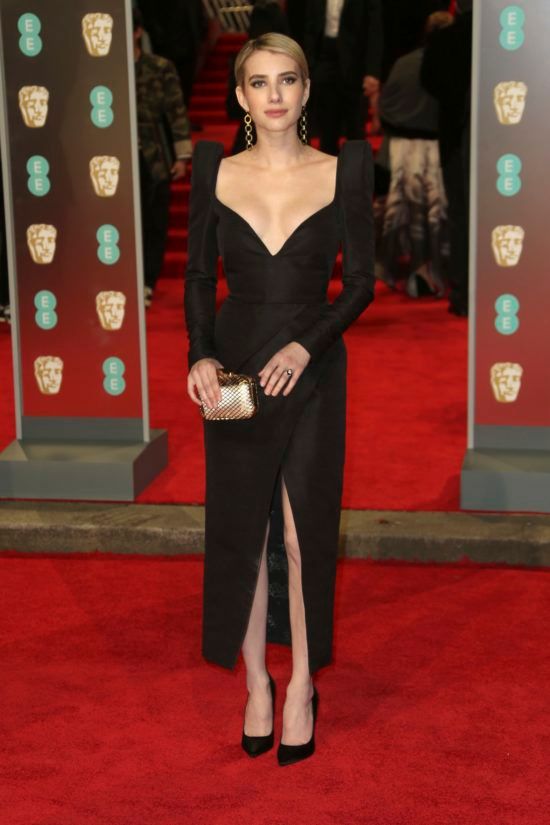 Lupita Nyong’o is one of the biggest style icons in Hollywood at the moment, and this look definitely proved her status is well-deserved! Instead of opting for something all black and simple, Nyong’o took her look up a notch by rocking a garment with avant-garde details. We love the dramatic halter neckline and sharp hip detailing, which balances well with the soft chiffon skirt. The look was sparkly, unique and eye-catching, which satisfies all the requirements for a winning red carpet look! 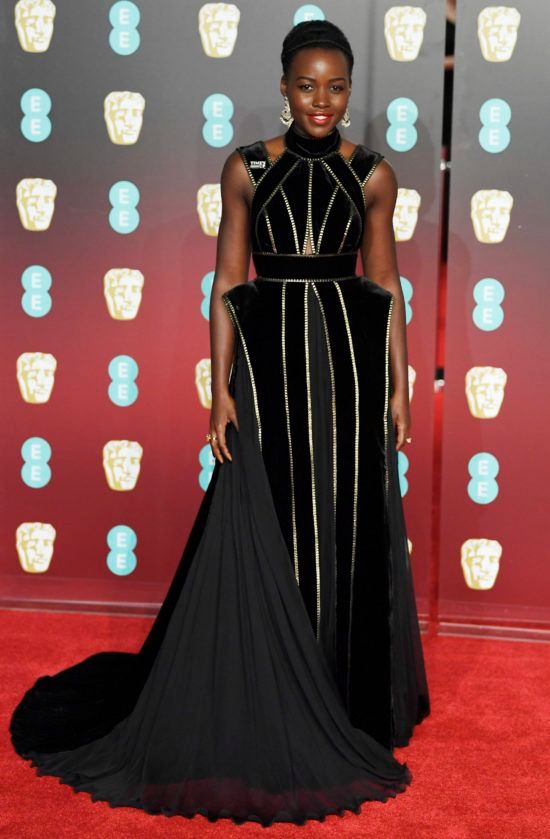 Jennifer Lawrence was the epitome of class at last night’s BAFTA awards when she stepped out in this polished black number. The strapless look featured a sharp square neckline which was nicely softened by the tulle off-the-shoulder sleeves. She sleeked her hair back behind her ears and rocked a bright red pout which was the perfect touch of glamour and glitz. 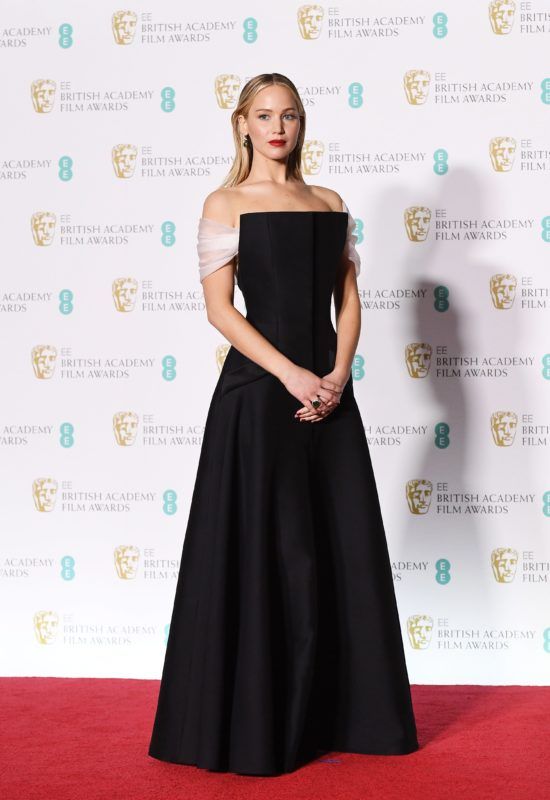 Margot Robbie is one of the most influential Hollywood style icons at the moment and her look from this year’s BAFTAs was definitely a huge hit! The gown featured swirling gold beading along the skirt, but the true drama was brought by the sheer overlay which covered the entire thing. This detail was definitely unique, and we love the demure and uniqueness it brought to her look. 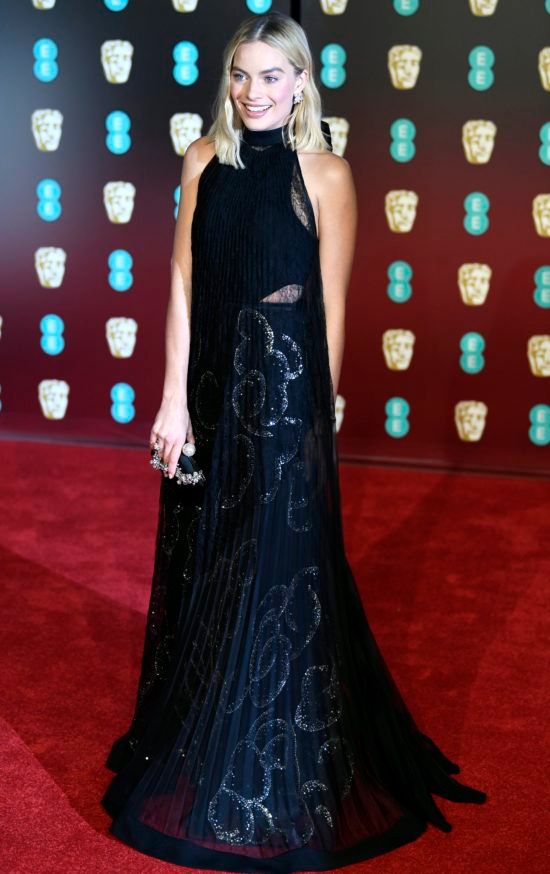 Angelina Jolie looked absolutely radiant on this year’s BAFTA red carpet where she stepped out wearing a sleek, off-the-shoulder number. Jolie is no newbie when it comes to an all-black red carpet look, so she was definitely in her element when it came to fashion this year. We love the simple elegance of this number, but she still brought the glitz by topping the look with a pair of sparkling diamond earrings. 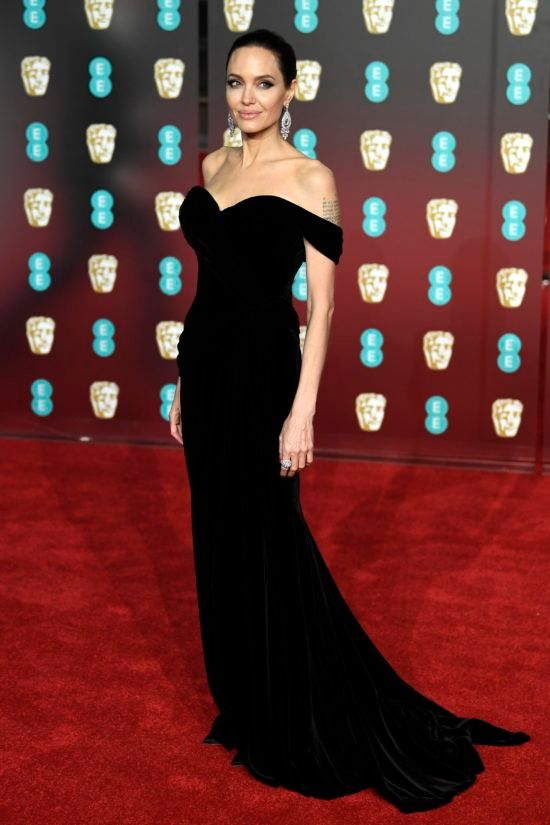 Kate Middleton ruled the BAFTA red carpet last night when she stepped out wearing this dark green empire-waist number! Middleton is the absolute queen of maternity fashion and this look definitely proved that even further. As a royal, it’s completely off limits to make a political statement which is presumably why she didn’t opt for all-black, but her black belt and clutch were definitely a nod to the #TimesUp movement. The wide-neck number was made even more glamorous by the chunky emerald necklace she wore around her neck which made her stand out as true royalty. 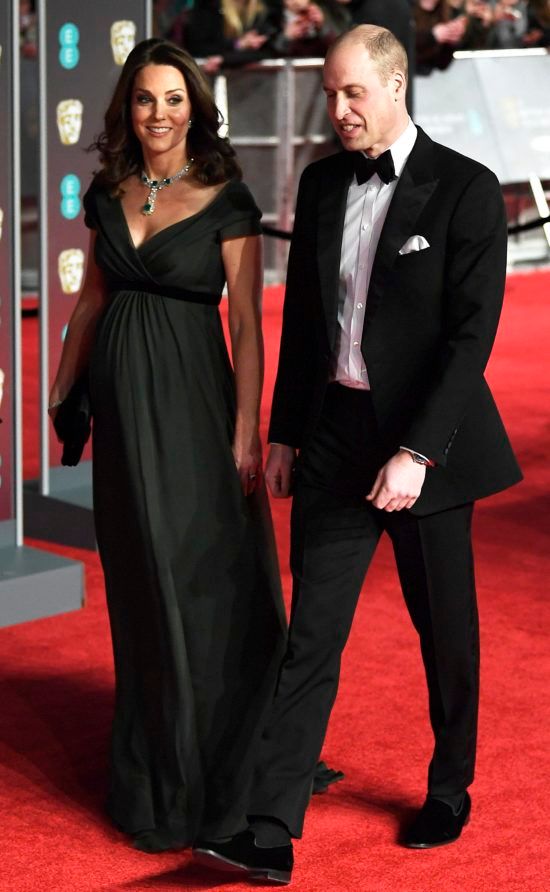