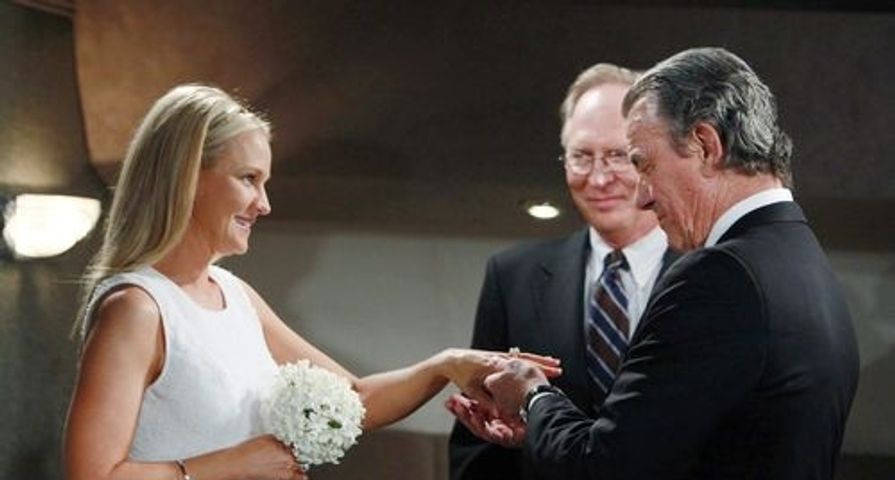 When it comes to the land of soap operas, most marriages don’t last that long, even when it comes to super couples. While daytime drama fans love watching their favorite twosomes fall in love, get together, and then head down the aisle, we also love watching them face the many ups and downs that only make them stronger. Most marriages in daytime drama are generally headed for doom from the get go, but below are some nuptials that really take the cake … wedding cake that is! Check out 12 of the shortest soap opera marriages in history.

Tracy Quartermaine is known for large number of failed marriages which total a whopping eight (with three of those marriages linked to Luke Spencer). However, number seven was seemingly unlucky for the this Quartermaine diva. Who wouldn’t be left a little unsettled by Anthony Zacchara? Well, Tracy sure was back in 2012, but that didn’t stop the insane mob boss from kidnapping her and marrying her. The marriage was never consummated and Tracy desperately tried to get out of it, but thankfully the union was dissolved five months later when Zacchara was found dead near the family boat house.

11. Nick Fallon and Gabi Hernandez – Days of Our Lives

Gabi Hernandez has made some questionable decision over the course of her young life, and one of the worst ones was believing in Nick Fallon. The ever-crazy Nick returned to Salem in 2012 when he was released from prison on parole. While Fallon seemed to have learnt his lesson while in jail and was apparently reformed, the truth was he was just putting on an act. The two got hitched in 2013 and the marriage was annulled five months later thanks to Nick’s psychotic ways.

Hard to believe that one of Port Charles’ super couples hits this list, but they did! In fact, Sonny could have a shortest marriages list all to his own. The truth is, marriage number three for these two only lasted four months back in 2007 because the two got married so Carly wouldn’t have to testify against Sonny at the time. While they weren’t in love, the marriage still proved just how much Carly cared for Sonny and was yet another chapter in their book of love.

9. David Chow and Nikki Newman – Young and the Restless

One thing every Young and the Restless (Y&R) fan knows is that Nikki’s heart will always belong to Victor. These two tend to make up only to break up again. Such was the case in 2008. During a break in her relationship with Victor, the Genoa City heroine fell hard for schemer David Chow. He was handsome, charming, well spoken, but also had been known to marry rich wives who died suddenly. The two got hitched that year, much to the horror of fans, but thankfully the marriage was dissolved when Chow passed away after a terrible car accident.

Carly and Sonny are GH’s “it” couple, but that may be because Brenda Barrett is not in the Port Charles’ picture right now. Sonny has always had a soft sport for the beautiful model, which makes the 2002 wedding she had with his BFF Jason a little odd. Digging deeper into the storyline, it totally made sense. The two decided to become Mr. and Mrs. Morgan to avoid testifying against each other during a murder trial at that time. Some months later and they annulled their marriage and the whole incident isn’t really spoken about nowadays.

7. Brady Black and Teresa Donovan – Days of Our Lives

There wasn’t a dry eye in any Days’ fans’ house last fall when Teresa left Brady and Tate behind to protect them against El Fideo. Still, back in 2014 the couple was still getting their feet and many fans didn’t necessarily want to see them together. Teresa has evolved significantly since her party girl days, but that year, she was smitten on snagging the wealthy Brady and was a bad influence on him. The two had a quickie Vegas wedding, but the marriage was annulled three months later when Brady realized who Teresa really was.

6. Jack Abbott and Nikki Newman – Young and the Restless

Nikki has been married eleven times over the years (with four of those weddings to Victor), while Jack has been married eight times. Therefore it’s no surprise that the holy union between these two back in 2012 ended in disaster. Less than three months into the marriage it was crystal clear that Nikki was more obsessed with the well-being of her ex than her husband (Jack). The bad news is they split. The silver lining? They do still remain friends to this very day.

Before Brenda, Carly, and Claudia, Sonny had another wife adored by GH fans everywhere. Lily was a kind soul who happened to also be the daughter of a mob boss, so it’s clear she had daddy issues when she hooked up with Sonny. It was also quite clear that Corinthos cared deeply for Lily and the two got married in 1996 when they learned that they were going to become parents. A little influence from Lily’s dad didn’t hurt either. Sadly, the marriage ended when Lily was killed in a car bomb explosion – one that was meant for Sonny. Corinthos mourned for months. Not only did his wife pass away, but he was devastated by the loss of their unborn child as well.

4. Victor and Sabrina Newman – Young and the Restless

While his better half Nikki has made this list a couple of times, The Moustache arrives at number four. He’s had marriages end in conflict before over the years, but Victor’s marriage to younger woman Sabrina sadly ended in tragedy. Much to her horror, Victoria’s dad and BFF hooked up in 2008. By the summer the two were so smitten, they headed for the alter. Sadly, only weeks later Sabrina passed away after a car accident, thus dissolving the union.

3. Victor and Sharon Newman – Young and the Restless

Speaking of Victor, while the marriage he shared with Sabrina was a beautiful one, the marriage with Sharon was more than creepy. Sharon had been married to his son Nick over the years and the two established a sweet bond where Victor filled in the father figure role Sharon so desperately needed. Sadly, in 2012 things got awkward between these two and they got married not once, but twice that year. Both were quickie marriages, but the one in January lasted mere days after it was annulled.

2. Brandon Walker and Sami Brady – Days of Our Lives

Before she fought between Lucas and E.J., or fell in love with Rafe, Sami was smitten with Brandon Walker. The two hooked up in the early 2000s and the handsome Walker helped Sami get over the whole Austin Reed preoccupation she had. In a lot of ways, Walker helped reform Sami. Sadly though, Sami still had some scheming in her and when they got married in 2003. The marriage only lasted hours until Walker asked for an annulment. It was revealed that Sami tampered with some paternity results and that was enough for Walker to walk out of Sami’s life for good.

1. Billy Abbott and Mackenzie Browning – Young and the Restless

Nothing like finding out that your wife is really your cousin on your wedding day. That’s enough to end any marriage … and fast! Billy and Mac shared a beautiful relationship, falling in love as teens where it evolved into a lovely romance as adults. The two decided to walk down that aisle together in 2003 and they really did seem like a match made in heaven. Unfortunately, right after they took their vows, it was revealed that Billy’s mom (Jill) was Mac’s grandmother’s (Kay Chancellor) daughter. Still with us? Even more confusing than following the blood lines was the fact that it turned out in the to all be false in the end. At least their attraction to each other could be explained and there was no longer that awkwardness between the two.